There are two ways for MegaPharm to make money: sell a lot of pills cheap or service minority diseases for eye-watering prices. Ideally, MegaPharm, wants a common progressive degenerative disease which fails to kill affluent white-folks. There are a few which [✓]: heart and circulatory disease, cancer, Alzheimer's. Alzheimer's is particularly attractive because there is no cure, the symptoms are distressing, and it lasts for years. Every player in Team MegaPh has had a punt at an Alzheimer medication [primer previa] and pretty much everyone has dug deep in their R&D kitty and still come up empty. 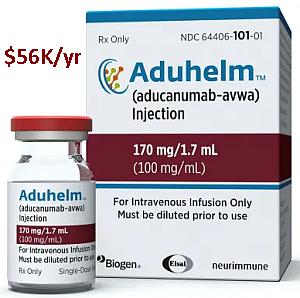 The latest cap  thrown in the ring is Biogen's Aducanumab [-mab IDs it as a monoclonal antibody] which will be marketed as Aduhelm and received a new sort of appro from the FDA on Monday. This anti-body targets the amyloid plaques that everyone who can spell aluminum knows to be associated with the development of Alzheimer's. Associated with: nobody knows about cause and effect here: it is possible that nobbling the plaques is like throwing gasoline on a fire because the plaques are desperate but characteristic response to the underlying unknown cause of The Alz.

Any new med in the USA has to be approved by the FDA [Fud n Drug Admin]. Normally, MegaCorp has to show that a) the drug works ["efficacy" in the jargon] b) the side-effects, if any, a small compared to the benefits [safety]. Many of us will have experienced side-effects of vaccination in recent weeks, believing that these are going to be less offensive than a dose of The 'Rona, long-covid, intubation and death. The last step of the licencing process is for the drug company, here Biogen, to submit the results of two independent Phase III trials where the drug has been compared to placebo for the treatment of a large sample of people with early stage Alzheimer's.

For Aduhelm, one of these trials showed that there were no statistically significant benefits, the other that the benefits were positive, but barely discernible. By the traditional standards of the FDA, this should have been enough: indeed Biogen should have owned the results and withdrawn to join the long line of might-have-been money-printers for Alzotherapies. But the FDA is barrelling on regardless of the evidence: "We decided that the accelerated approval pathway fits well here: it allows for there being some residual uncertainty on the drug's clinical benefits while making the drug available to patients rather than having to wait." FDA approval means that Medicare is obliged to pay for this treatment in eligible patients. The FDA reserves the right to pull the plug if the larger sample of treated people throws up even more adverse side effects and/or there is no demonstrable benefit. But FDA approval means that income is now being generated by Biogen during the roll-out. The company's share price bounded 50% higher on the news and the value of other companies known to have Alz drugs in their pipelines achieved a collateral boost. The guide price for 12x monthly infusions is $56,000 - ymmv depending on how well your insurer plays hard-ball. Even so, the actual patient and their families will probably have to stump up 20% of the cost of the treatment. Biogen is anxious to get this cash-cow a-milking because the tiny but lucrative market for Spinraza [Bloboprev] their successful therapy for SMA Spinal Muscular Atrophy is being challenged by Zolgensma [yest].

Who is going to be making a decision on whether to risk a painful brain swelling in an elder who is still able to have a conversation and is reasonably continent ? Unlikely to be someone who can easily fetch $50,000 out of their back pocket for the next several years. Even a $10,000-a-year "co-pay" would eat up all my pre-retirement discretionary income. It would probably be the difference between the kidder going to college or not. Nobody should have to make those choices even if the $50K brought the Elder back to playing soccer or scrabble with the grandchilder. But Aduhelm doesn't promise that; it hopes, with a following wind, to be able to promise a teeny amount of slowing in the rate of decline in cognitive function and a definitely reduction in the number of amyloid plaques.
But here's the thing; when it goes to market Aduhelm will start to bask in the kudos of the placebo effect - it will be as effective as homeopathy which works quite well for this very reason (so don't knock it!). A few anecdotes of Dad's improvement in cognitive function will start a cascade:
But the same benefit could be achieved by Big Red Pill Inc., @$5 a day to cover the marketing campaign.
Tnx to G for goading me to pay attention.
Posted by BobTheScientist at 07:22