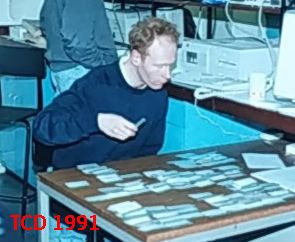 You probably have people in your life whom you know slightly but reliably. It's like you were besties in a previous existence because you know that they will (just ask) lend you a tenner, offer an emergency couch to your cousin, or write a letter of recommendation. For me that was Frank Wright, who died after a long illness in December last year [Scotsman Obit -- Workobit]. I only heard the news last Friday from Des "Cetartiodactyl" Higgins. I was speaking to Des to assure myself that he was still with us after he was able to attend his own wake with a twitter-storm of valedictory good wishes. The three of us Des, Frank and Bob, were all closely associated co-authors with my first binfo boss Paul Sharp who has done well for himself.

I used to meet up with Frank on the conference circuit in the early 90s. In 1991 he arrived a day early for a Genetics Society meeting in Dublin and we spent the morning chattin' away while assembling name-badges and conference-packs for the delegates [Above L]. He could have gone out for a bit of tourism but he preferred to be useful . . . because Frank. The following year, we both rocked up to a MSAMB [Mathematical and Statistical Aspects of Molecular Biology] meeting in London. We were catching up at the drinks before the conference dinner when he abruptly stopped to reveal a cunning plan to secure seats at the same table as John Maynard Smith who was like a god in that niche area of science. Frank, who had clearly done his assertiveness training, steered me into the wake of JMS and elbowed aside better mannered more senior scientists who also wanted to hob-nob with the great man. At the dinner the craic was mighty. I knew I had a photo of Frank, and in the same bin I found a picture, probably from the 1991 TCD conference, of John Maynard Smith being profound with Paul Sharp [below R]. 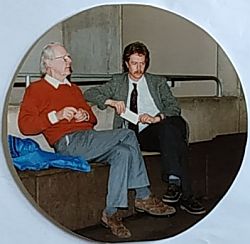 The year after that I was able to return the favour because I was on [INCBI] expenses at another molecular evolution conference, but Frank was between jobs. Although he had scraped together the train fare to the conference venue, he didn't have a hotel room booked. Not a bother on him, he asked if he could bunk down in my room. Which was fine because we both got mildly hammered at the afters party. Frank secured a free breakfast the next morning on my coat-tails.

What we had in common is that we were both "infrastructure guys": making it easier for other people to do science. While Frank was nippy in getting the best seats at a dinner he would never gouge someone scientifically out a sense of ambition for himself. Rather he was careful, reliable, helpful and generous with his time regardless of whether his good deeds would further his career. There will be many people in Scotland who miss him more that I do.