It's four years since I read and reviewed The Way We Die Now: The View from Medicine's Front Line (2017) by Seamus O'Mahony. That was essentially a reflection on how medical hubris had deluded people that they were going to live forever. That assumption may be uppermost in your 19 y.o. 'mind' when you launch your body off a cliff-face paragliding, base-jumping or mountain biking; at 79? not so much. The actuarial odds; your slowed reaction times; the leaching of calcium from your bones; the feebleness of your immune response; all these are stacked against you at 79. O'Mahony is six years younger than me but he retired in 2o2o just as soon as his pension enabled him to do so. His Death Book made him realise that he could do better with his literary talents than writing coherent case-notes and the endless reports required of him as a latter-day health bureaucrat aka consultant gastroenterologist.

I say latter-day, not because O'Mahony is a Mormon but because in his former days (when he was in live forever mode) he and his medical professional colleagues had considerable autonomy, not to mention privilege. For about 100 years, more or less bracketting the 20thC, doctors had become gods with the power of life and death. Aseptic technique and antibiotics had a lot to do with this power. But knowing when and where to apply the levers of medicine was built up through experience; and experience built up through insane hours on the wards, in theatre or seeing a lot of sick people in clinics. Then it all turned sour: sleep-deprived doctors made too many poor decisions with obvious adverse outcomes for patients. Families refused to defer to the actual doctor in Cork, when Dr Kildare was saying something different, and far more optimistic / godlike on the telly. Dr Google only added the last nails to the coffin of medical unaccountability and that only in the 21stC. 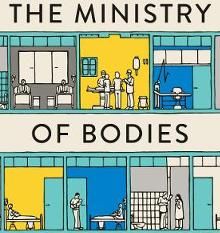 Since I was given a smart-phone in 2019 I've been downloading audiobooks from Borrowbox. When I saw another book by O'Mahony Can Medicine Be Cured?: The Corruption of a Profession (2019), I failed to read the small print and downloaded an e-book rather than an a-book. Different medium, and not accessible when driving or walking, but readable nevertheless. When that was finished, I immediately downloaded his third unpicking of the tapestry of modern medicine The Ministry of Bodies: Life and death in a modern hospital. One anonymous reviewer called him a physician-poet, which would have pleased him mightily because William Carlos Williams of the red wheelbarrow was another such.
In the same way that The Blob refers to The Institute as my quondam place of work, O'Mahony's last gig in Cork University Hospital is lightly fictionalised as The Ministry. He retired last year because he'd done enough. Most of us couldn't work in a hospital for 20 minutes, let alone 20 years of being shouted at by those in hopeless pain and treated as an interchangeable cipher by managers and auditors in comfy offices: "we need X+1 effectives on the roster this weekend, can't you postpone your daughter's wedding?" And ever and always, despite the rhetoric from head office, the patients are last on the list whose requirements must be met.
Never enough joinedy-up thinking. Too much bean counting.
The very best doctors see the whole patient, not a clatter of ¿fixable? symptoms. Regular doctors just add more meds to the list, already too long, of brightly coloured pills that appears with breakfast. And according to these books, consultants engage in a perpetual internecine feud: refusing to accept difficult cross-discipline patients on their books. An elderly lady who has broken a hip because she fainted in the kitchen is neither cardiac nor orthopedic.
O'Mahony's special tetchiness is reserved for speech and language therapists. Mission creep has allowed this discipline to own choking and swallowing. Woe betide the doctor who has a weekend's leave and comes back to find half their ward sporting nasogastric feeding tubes because the junior doctors were unable to withstand the monomaniacal certainties of the SLTs. If you are really frail having the discomfort [abdominal cramping/swelling; diarrhea; nausea; vomiting/reflux; perforation, pneumothorax . . . I could go on] and disempowerment of a NFT makes your hospital stay decidedly crappier. Note to my adult kids: I can imagine worse ways to go than choking to death on one last meatball. The holistic existential irony is that, if your child stammers, the waiting list for a qualified speech and language therapist can be years rather than weeks.
Posted by BobTheScientist at 07:10