We spent ~40 years raisin' sultanas children: The Boy being born in 1975 and Dau.II leaving home in 2013. That was partly choice and part force of circumstance but mainly because there was a gap of 17 years and 51 weeks between The Boy and Dau.I. Forty years is (or at least was) one estimate of the length of a working life. Approaching retirement, the weeks don't pass, they rush in no time at all I'll have no more 9am-Monday classes to get up for. For several years I have been quipping my students about my "two-week event horizon": if a conversation happened more than a fortnight ago, I need some prompting to remember it. I found my car keys on the grass by the woodshed a couple of weeks ago - before I'd lost them! That was a relief and I upgraded the key-lanyard to bright yellow to minimise a similar loss in the future. Here's a note to self: if you're going to leave your keys and spectacles in random places at home they will be easier to locate if you clear out all the camouflaging clutter. Now, when we might deserve a bit of break from child-rearing, we have instead switched generations to look after what's left (50%) of our parents. Because those parents are a generation older, and because of our own deficits, End of Life Issues loom large and lumpy. This is more than deciding on what colour the wicker coffin should be, it's about the trouble and expense of getting to it years or decades into an uncertain future.

Which brings us to Careblazers TV which was founded Dr. Natali, a board certified geropsychologist, so no more a Doctor than PhD-me is a Doctor. It's a youtube channel which gives help and supportive advice to carers-of-elders. In many cases, this acknowledges that the Elders are beyond caring much about anything. Here's one vid on dementia meds [36mins] which I found useful because it explained a bit about the classes of drugs, their mode of action, and something about their interactions. Without that you're just presented with a blizzard of damn-fool names: some proprietary, some me-too generics, some equivalent, some completely different; some Pfizer, some Glaxo. The information is delivered easy as a dialogue between Dr Natali and her rescue dog business partner, Guinness and Chris Martz [who has three dogs a surname and a proper degree] her favorite pharmacist in Scottsdale AZ.  I doubt you have the patience to sit through half an hour, so I'll give you an executive summary. Here's Chris and Natali chewing the fat:

There are two broad classes of drugs to deal with cognitive deficits of Alzheimer's and dementia:
You are advised to stop these meds if you don't notice any cognitive improvement - save yourself, your insurer or me the tax-payer a bunch of money and don't needlessly heedlessly trick about with the delicate homeostatic balance of excitatory and inhibitory NTs. BUT for god's sake give it 4 weeks to kick in and don't be chopping and changing your meds - that really wrecks your head.

Side effects: Diarrhea, nausea, vomiting, loss of appetite, increased weight, loss of bladder control, back pain, headache, bruising, drowsiness, or dizziness may occur. No surprises here: AcetylCholine is a one multi-tasking neurotransmitter triggers muscular contraction [bladder sphincter included] and a host of other systems and functions in the body. 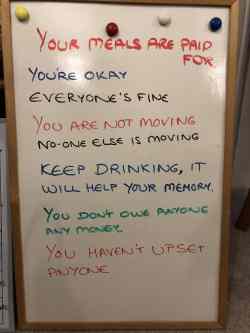 Later on in their tete-à-tete, Chris and Natali talk about anxiety meds; of which SSRIs [selective serotonin re-uptake inhibitors] are the class recommended for old buffers. Other meds like beta-blockers and benzos are not recommended for old folks because they up the risk for falls, stroke, and other immediately adverse outcomes. But one line which I found really helpful was that a No Med approach will be better than a pharma-driven solution to anxiety. That might require carers to, like, talk to their elders rather than talk at them and maybe listen to the answers and try to imaging what it must be like to descend into a booming buzzing confusion where nothing makes sense anymore and you don't recognise any of the people who are hoiking you up, sitting you down on the t'ilet, loading you into a wheel-chair, slapping plates of food in front of you without asking what you fancy . . . let alone getting annoyed with you because you can't wipe your own arse.  A month ago, Philip Grimmer, a GP in England, captured and tweeted [see L] one way of allaying suspicion and worry in one of his elderly patients. It went viral and was a lot cheaper and less intrusive than a pharmaceutical solution.
Posted by BobTheScientist at 07:31