One foot in front of the other

Ireland in the Spring is when, if at no other time, we have weather rather than climate. 30+ years ago we rented a cruiser on the Shannon for Easter week: we had broiling sunshine and horizontal snow and everything in between. It has been really dry for the last month, so it's easy to take the good weather for granted. But really, for outdoor chores - counting the sheep [and the lambs!]; chopping wood; planting spuds; turning the compost - it is a good idea to be up and doing when it's not raining. There's plenty of time for tea later. 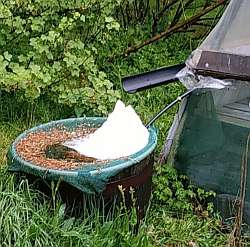 On Saturday at about tea-time, I bestirred myself and brought in a basket of fire-wood. I noted in passing that it looked dramatically black over Blackstairs and though to more about it. I hadn't been [back] on the sofa 10 minutes but the Valkyries roared in with a drenching storm which turned to drumming hail. Part of me was annoyed because I wasn't up in the polytunnel for the full grandstand sound-surround experience; but the other 80% was really smug at having the chores done before dark. An hour later, our neighbour across came by with a dozen free-range eggs <whoa brilliant!> and remarked at the heaps of hail under the eaves of the sheds. They had not even had a tinkle of drizzle although they live less than 1km away. What a difference a county border makes. Later still I went up to the said polytunnel and captured a heap o' hail which had been delivered to the rain-butt. I guess like Everest in the Miocene, there was a lot more at the height of the storm.

Carpe diem, lads; because this evening it may be too late. My pal Russ is on the move this upcoming Sunday 23rd May to raise funds for the local chapter of the RNLI. He's undertaking to walk 18km from his home to Dunmore regaled along the way by a relay of friends-and-relations. I think that's a brilliant concept and the RNLI deserves support because fetching sea-farers out of the drink brings out the best in people. My retirement gift to myself was to finish the third part of my Western European Walk [Portugal 1989 - Spain 2004] from St. Jean Pied de Porte in Gascony to Cherbourg. When it was on the long finger of aspirations, several relations said they'd walk a stage with me. Who knows if/when it will happen: as the disruptive tides of Covid drain away so does the synovial fluid of my antient knees.

Anyway, it's not about me; it's about The [Manchester] Russianside Rambler. Give? I gave already.