The cloths of Heaven

An Fear aka The Man aka St Micheál of Martin, our Leader, announced that, from 10th May, intercontinental ballistic inter-county travel would be allowed for all. Clan Blob were quite slow on the take-up of these freedoms but we expect Dau.II to come across from the People's Republic later today. Though not without faults [who is?], nobody chid Dau.II for not being willing. She can change a plug, mow a lawn, saw a straight line through lumber and is happy with power-tools.

It didn't seem fair to ask Corkies to break their journey on Costa na Déise to mow 10 or 12 ares of grass simply because they were passing. And there is self-interest in this: I'd rather not wait an extra couple of hours before the English Market hamper is opened and we can start tucking into cake, custard, cheese.

Accordingly, I scabbed a lift with The Beloved last Thursday when she travelled South about her father's business. It was apparent from the photo above that I wasn't the only one with thoughts of mowing: a farmer was in process of taking the first cut of silage from the meadow on the cliff-top just West of Kilmurrin cove. I can definitely be relied upon to take a crap photo; but this captures some of the magic of the Waterford Coast with its receding headlands all the way to Cork and backdropped by the distant Comeragh Hills. If there's one thing my father could capture in his water-colours it was the idea of the variety of clouds in Ireland. Taking a shy-and-retiring role in the composition is the banks of thrift / sea-pink Armeria maritima [prev] which is characteristic of The Copper Coast; partly because of its resistance to heavy metals. 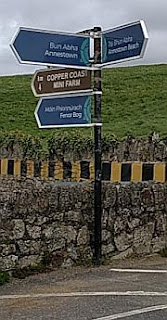 Preparing for a [brief?] interlude of inter-county travel, Dau.II asked me to prepare a Beachcomber's Guide to The Copper Coast. I was nothing loath; indeed I have made a project of this in the past in anticipation of friends-and-relations visiting this gem of hidden charms - geological [go Ordovician], botanical [see above], ornithological [go Choughs Pyrrhocorax pyrrhocorax]. All those coves: Stradbally, Ballydwan, Trá na mBó, Bunmahon, Knockmahon, Kilmurrin [see above], Boatstrand, Benvoy, Annestown, Woodstown, [no, not the oyster Woodstown], Kilfarrasy, Garrarus, Trá Mhór. Since she could toddle Dau.II has been to all of them, but unless you're driving and or paying attention to the passing landscape, it can be difficult to a) tick them off in order b) remember which one has the towering purple cliffs and which are only accessible at low tide. It turns out that Waterford CoCo has not been idle during the lock-down but have prepared and distributed a lot of new signage [L], so you know where you be when the car-door opens and you can rush out to explore. As well as the finger-posts, there are new info-boards at each place with some handy annotated photos of what you're looking at. Especially interesting because there have been substantial, photo changing, rock-falls at least on Woodstown and Ballydwan beaches.
Had I the heavens' embroidered cloths,
Enwrought with golden and silver light,
The blue and the dim and the dark cloths
Of night and light and the half light,
I would spread the cloths under your feet:
But I, being poor, have only my dreams;
I have spread my dreams under your feet;
Tread softly because you tread on my dreams.
WB Yeats
Posted by BobTheScientist at 07:31