That is forever England

If I should die, think only this of me:
That there's some corner of a foreign field.
That is for ever England
The Soldier by Rupert Brook (1915)
Within a month of the publication of this quintessentially romantic Edwardian take on soldiering, Brooke was dead and buried on the island of Skyros as an early, septicaemia, casualty from the Gallipoli campaign. He didn't last long enough to see most of his friends blown to buggery in Flanders or Turkey which might have taken some of the gloss of his poetry.  WB Yeats characterised Brooke as ""the handsomest young man in England" and, at Cambridge before the war,  he broke the hearts of men and women including George "Everest" Mallory. Alfred "Oscar Wilde's Nemesis" Douglas was scathingly dismissive of Brooke and all his poetry stood for. 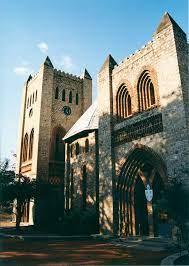 St Peter's Cathedral, Likoma [L] is a bit like Brooke; planted in a corner of a foreign field, trying a bit too hard to be English and making no concessions to the actual island location in which they can be found. It's rather cheaper and easier to get to Skyros than to Likoma which is a tropical island in Lake Malawi. We've been there recently. If your nose for geogoddity is the least bit like mine, you may have been intrigued by two enclaves in the section of the lake allocated to Mozambique. One of those black lines surrounds the island of Likoma; the other encircles Chizumulu; and they are both exclaves of Malawi surrounded by foreign waters.

The cathedral was built by the UMCA Universities Mission to Central Africa which answered a call from David Livingstone 'to help Christianize the people of The Dark Continent and do their best to oppose slavery. This group eventually settled on the Lake in 1884 because the climate was less devastatingly malarial and denguey: you can't convert the heathen if you are dead. The investment of British money, British missionaries and British architectural standards was key to establishing British hegemony over these islands despite them being much closer to the Portuguese/Mozambique shore.

The Portuguese colonial government sat down with their British counter-parts in the 1950s to thrash out the common ground and iron out any difficulties between the two empires. They agreed to a series of drainage and flood control works around the Shiré River, the plug-'ole of the Lake, which drains from Lake Malawi and eventually joins the Zambesi deep in Mozambique. In exchange for owning a third of the cost of these public works, the Portuguese got access to the fishing up to the median line of the lake . . . excluding the Likoma archipelago.  These signed-off economic and political agreements between colonial powers established the default position on the boundaries for the independent states of Malawi and Mozambique. Protestant Missions converted 60% of the people of Malawi.