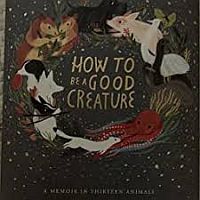 Dau.I "The Book" came to care for her parents a tuthree weeks ago. Her male parent was behaving strangely and the family were concerned about his stability. It was good to have a good pair of caring hands on site, not least because of an elder-accident that needed attention. In her mind, read a good book is a pretty good solution for many forms of mental disequilibrium, and I guess she didn't lick this up off the stones. Accordingly, she lent me her copy of How to Be a Good Creature: A Memoir in Thirteen Animals by Sy Montgomery. Montgomery is bankable having written a good many books where she has hung out with field biologists and written about what field research is like and how much it is likeable. Quite likeable, is the answer and Montgomery could have been a competent scientific researcher [tenacity, patience, resilience, painstaking] if she didn't prefer writing about the animals in a breezy, intelligent and accessible style. How To Be is a consciously attractive old-style book: untrimmed page edges; rubrics for each section; generous margins ; quirky colophons in red at the header and footer. You don't get that generous treatment by a big publisher [Houghton Mifflin] unless you are, as I say, bankable. Montgomery is one of very few authors who is actually support themselves by what they write.

If you detect a tinge of snottiness from me about writing poety books about science rather than doing, like, actual science, it is because you are well-tuned to emotional baggage . . . not to say hypocrisy. If I was a real scientist, I would have seen a lot more of my scientific papers through the peer-review process. Instead, I crapped out far too often because I lacked finish. On the other hand, I've written thousands of 500-800 word Blobs about all sort of aspects of the scientific process. If I got even 10c-a-word for my efforts, I wouldn't now be driving a Yaris. I guess we work in the same science-lite field. The other thing we have in common (apart from being born in the 1950s) is that we are both service brats with WWII veteran fathers.

The first chapter is about her first puppy acquired when she was The General's Daughter living on a US Army base in the 1960s. After that we are introduced to a trio of emus; an enormous hog; a huge tarantula; a ruthless weasel; 'nother dog; a pair of tree kangaroos; another dog, an octopus; a one-eyed dog. I think that adds up to 13, but I may have left some of the dramatis personnae on the cutting room floor. The conceit is that the unhuman animals have taught the author to live a better life. Not least by developing compassion and empathy for her companions. That's fair enough and worthy of attention but there's an under-current of inequality in many of the relationships described. I'm in the process of marshaling my arguments about the ethics of 'owning' animals but there is something really sketch about the interactions with "Octavia" the octopus.

The New England Aquarium in Boston has acquired a succession of Giant Pacific Octopus Enteroctopus dofleini, [prev Octopus apollyon] because it is a big draw for visitors. A number of books have come out recently pushing the idea that, for all their being invertebrates, cephalopod molluscs are a smart as [insert your favorite mammal here]. I am agnostic about octopus IQ but IF the are as clever as an ass, THEN they should not be isolated in a cage [or a 2,000 litre tank]. The Irish Donkey Sanctuary will not allow people to foster one donkey - you have to take two. For donkeys, in Ireland, in the 21stC; solitary confinement is considered a cruel and unusual punishment. If you think that you're getting a handle on normal octopus behaviour when the creature is so constrained, then you are delusional. It looks like octopus as fashion accessory. harrrrumph! I've had something to say about octopodes in the past including my own contribution towards presenting an octopus to the public . . . after it killed itself.