Borrowbox continues to deliver. Their search engine is kind of crap: "anne lamott" sourced me in order Ann Napolitano Ann Cleves Ann Patchett Ann Weisgarber whom I presume are "acclaimed" "bestsellers" or whatever Borrowbox thinks will please their imagined demographic. Not me and not even close to what I was looking for: google knows me better. If you can't find specific requests you may as well just browse through what they have. 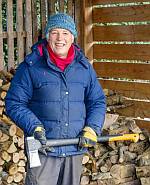 My latest coup, is Wildwoods by Richard Nairn [L he gorra woodshed!] a ramble, actual and metaphorical, through Ned's Wood a relict 3 acre = one-and-a-bit hectares attached to a micro-farm "somewhere in Wicklow". Ned being a 19thC tenant farmer who finally secured the title to this plot of paradise-with-hardship, through the Land Reform Acts of 1881 and 1885. Nairn passed through Natural History at TCD a tuthree years before me and became a Name in Irish conservation biology working for Birdwatch Ireland; NI Natural Trust; Royal Irish Academy. But for the last 30 years, he's been the founder and director for Natura Environmental Consultants. Wearing that hat, he helped broker a deal between eco-warriors and The Man when the latter want to widen an arterial commuter route through Gleann dá Ghrua = the Glen of the Downs. The commuters got their road, a handful of mature trees were felled; the ecowarriors learned how to sleep in the trees; and the lawyers got their yachts and/or second homes somewhere nice.

Wildwoods is a sympathetic read: I think we're on the same page w.r.t. badgers; coppicing; ivy [good]; native vs imports; Sitka spruce; pine-martens and red squirrels. Planting trees is good: we've planted a couple of thousand of them and never in anything that could be accused of being a monoculture. And neither Nairn nor I are in it for the money. Although he cites a couple of inspiring cases where trad farmers have converted some of their unproductive rough pasture into stands of trees which after a couple of decades are beginning to wash their face in the economy of the farm: pea-sticks and hazel stakes to begin with hardwoods for joinery later.  You don't plant oaks expecting to see them become the keel and knees of a sailing ship in your life-time.

Are we grateful that there is an audiobook of Wildwoods?
Yes we are.
Whom should we thank?
Bolinda.com who are perhaps the best creator of talky content in English. They also seem to have created Borrowbox.
So what's your problem?
The slap dash production standards for this niche in the publishing world.

My experience is that the best readers are authors unless they have a King's Speech impediment or a really impenetrable accent. Yay! Gretchen McCulloch. What seems to happen is that Bolinda put out a call and the agents of resting actors [short of the readies] and jobbing radio journalists [good speaking voice] put their people forward if their client is desperate the price is right. For Wildwoods the winner of the voice-over contract was Ruairi Conaghan who [at least] has an Irish accent. Except that he was raised in the heartland of Ulster and never had Irish in school. Having a Nordie accent shouldn't be a reason for excluding a candidate but it does render a certain amount of cognitive dissonance given that the author himself has an unexceptionable Educated South Dublin ESD accent [listen?] - he's too old to speak DORT - and the wood in question is in Wicklow.  The problem is that
a) has a tin ear for Irish words: Coillte is not really Quilter; Meitheal is not Meethaul - that's our leader St Micheál of Martin
b) he's Arts Block educated so mangles some science words. There are two sorts of oak in Ireland: Quercus petraea the sessile oak and Quercus robur the pedunculate oak. The former has flowers and acorns which sit directly on the twig; in the latter the flower develops at the end of a peduncle - which in turn is a fancy Latinate name for 'stalk'. Conaghan sometimes uses pendunculate and sometimes pedunculate. Aaaargh you may quote me your Emerson "A foolish consistency is the hobgoblin of little minds" but it sounds like yer man doesn't know or care what he's saying. Taster on Soundcloud.

Actually, I fear that this is all driven by economics. How much does Bolinda pay for 6 or 10 hours of read script? Not enough to make it worth Conaghan's while to listen back to his offering and re-record the bits he fluffed; let alone employ a copy-editor with a sound ear who can mark up the text that needs more than one take. Stephen J. Gould, who produced a column for Natural History every month for 25 years, found that they only way he could justify the time in a busy Harvard Faculty year was to sit down and write the whole essay in one sitting and then <done!> send it off to the magazine.