Dig it and dung it 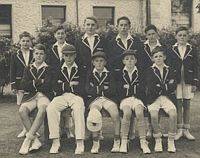 I was reminded of this over the weekend because I spend a couple of hours scooping sheep-shit up from the haggard [which had been used a night-nursery and delivery ward for several days in April]. If the sheep aren't grazing it, I'm meant to mow it and mowing <fffrrrrPPPT> sheep pats is only amusing the first couple of times. Furthermore, all that pre-digested grass and coliforms does wonders for the kitchen compost stirred into the mix.

There is demand for compost as we are now planting out some vegetables to eat later in the Summer.  There was a morning frost on 5th and 6th May which would have fritzed any beet and chard seedlings if they'd already been planted out. We have a 3 bin rotation [R] which converts kitchen scraps + nettles + grass-mowings + a bit of straw into a fine friable loam. It is a fine judgment as to how much work I want to put into it. The worms and the lactic acid bacteria should do the heavy lifting but I find we get a better product if I turn the first, least digested, bin over by forkfuls at least once. This aerates the 'matter' which may or may not be good; but it also mixes a clot of straw up with some over-heated grass-mowings to restore a homeostatic equilibrium that makes the worms' work easier. It takes about 40 minutes to mindfully steadily turn one bin into the next. It takes a little less time to spoon the garden-ready compost into bags because a) there is less of it - there is a plume of CO2 over compost heaps from the energetic exercising of microbes b) there are no tangles to catch the fork.

Having bagged the friable of bay-3 and transferred the contents of bay-2 into the vacated space, I had a nice cup of tea. I returned for my upper-body work-out by heaving bay-1's material into the middle bin. This has the additional benefit of putting the most recent, green, tangly, material to the bottom of the pile and mixing it up with more rotted stuff. I'd take a photo, except why bother: the composting area looks exactly like it did last year except the plastic bags of loam are a different colour.

And it's worth putting the verse from the Gospel of Luke into the context of the Parable of the Barren Fig Tree. Which I interpret to mean that lecturers can easily write off the class cut-up as an unteachable pain-in-the-arse BUT a bit of care attention can often bring out the best in unlikely people. Not everyone is cut out for academic work but there are other ways in which folk can demonstrate their worth - to themselves and to their community. That's the take of a once-upon-a-teacher; your mileage in dealing with troublesome people will certainly vary.