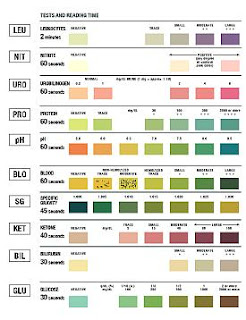 Humours! Since Hippocrates and Galen, doctors have been tuning in to the fluid balance of the human body. Those ancients and 1,000 years of their followers recognised

From which we derive the words for character traits like Melancholy, Phlegmatic and Sanguine. Nobody now believes that depression is due to the spleen making an excess of black bile but the principle did put doctors onto the idea of checking bodily out-puts. If you have experienced a lot of snotty kids in surgery, you can tell from the colour and smell when an excess of rhinovirus has been superseded by a more threatening bacterial infection. In the Netherlands toilets are designed so that user can easily scrutinize the stool before flushing - which is handy for getting on top of another pinworm infestation. It is a rare visit to your medico that doesn't involve a urine sample.

In the old days, the doctor was likely to dip the tip his [sic in the old days] pinkie in the sample bottle and taste it. We have a mighty set of over-lapping, complementary physiological mechanisms for controlling the amount of circulating glucose. Waste not, want not: glucose is the primary currency for energy in the body and without a source of energy cells are quickly dead. The normal interplay between insulin and glucagon scoops up excess glucose before the kidney gets a chance to dump any. You're likely in trouble with sweet pee [Lathyrus odoratus - not].

You may have noticed that your doctor doesn't do the finger thing! They rather shake one out from their vial of 100x Multistix and dip that instead. That gives a more or less instant read out of Blood, Leucocytes, Nitrite, Specific Gravity, Glucose, Protein, Ketones, Ph , Urobilinogen and Bilirubin. At 43c it really is extraordinary good diagnostic value. Novice clinicians may need to read the manual [above R] - not to be confused with a Pantone colour swatch for matching the curtains with your new dinner-service - but old hands know what key colour change they are looking for. We have Helen Murray Free, and her husband Al, to thank for this now taken-for-granted appropriate technology. 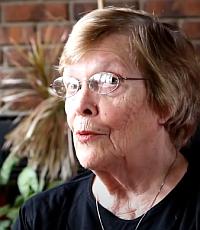 Helen Murray [L] was born in Pittsburg in 1923 and was all set for an Arts major at college reading English and Latin when Pearl Harbor was bombed and vacancies opened up in blokey science disciplines. Murray switched to Chemistry - if you're smart you can do that - and graduated in 1944 and got a job with Miles Labs in their QC and diagnostics division. But she transferred sideways into the research division run by Al Free and the two of them quickly became a complementary and very effective team. They were tasked to develop new diagnostics for urinary glucose. This was important because there were treatments for diabetes [thank you Banting and Best!], so patients could go forward with hope from a reliable test.

Like a lot of chemical tests, they were looking for a colour change which would light up for glucose and nothing else. Their first products involved soluble pills that could be popped into a urine sample. Clinitest used cupric sulfate, citric acid, sodium hydroxide and carbonate for the fizz. Miles Labs' cornerstone product was Alka-Seltzer so <fizz> was almost required.  But that was wasteful because it needed an extra bottle - the rest of the sample could be used for other diagnostics, sent to a specialist urology lab. Creating another diagnostic test - for Hepatitis A - set the Free lab on a trajectory to make a single product that would do multiple tests at once. Another key conceptual break-through was dry-testing where the active ingredients were migrated to a plastic strip which could be dunked. That saved on the extra bottles and effectively replaced Galen's medieval finger-tip. And the idea could be scaled up to make multiple tests from one product. All sorts of teething problems had to be confronted and solved: separating the various chemical cocktails so they didn't bleed into each other; ensuring stable shelf life. Of all the one-time use plastic products which are available, pee-sticks have arguably the best utility:carbon-footprint ratio.

Helen Murray Free [interview] continued working through six children; co- wrote The Book Urinalysis in Laboratory Practice with Al and retired in 1982 before she turned 60. She then devoted the next few decades to making chemistry understandable and accessible to girls and other groups normally excluded from the Joy of Science. She won the National Medal of Technology & Innovation in 2009. She died in the fullness of her years last Saturday having made a difference.