I wrote earlier about decluttering my life into a rucksack in 2004 and perambulating through Spain. The implication was that I had engaged in a trek like Eric Newby's insouciantly stiff-upper-lipped "A Short Walk in the Hindu Kush".
"I found that the blood filling my boots from the many blisters and leaking from the lace-holes was rather a good thing because it kept the flies from my face"
It wasn't all like that, although there were blisters. Through a combination of accident and constraint, we (The Boy and I walked the 120km from Valenca/Tui on the Rio Minho together) arrived in Santiago de Compostella on this very day 9 years ago.  I know and remember because it was/is the Feast of St James the Great, Dia de Santiago. Although I was emphatically not full of Chaucerian

"Thanne longen folk to goon on pilgrimages,
And palmeres for to seken straunge strondes"
it would be disingenuous to maintain that we knew nothing of such matters when we set out from England immediately after my sister's wedding.  There was the most almighty party in the square next to the Cathedral on 25/Jul/04 not least because 2004 was a Jubilee Year when The Day falls on a Sunday.  Those things clearly make a difference to people because 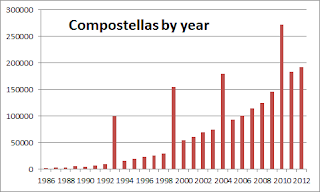 you can can see that those years find especially favour for travelling to Santiago. (The Compostella is the certificate you get from The Church for walking at least 100km to arrive in Santiago.)  Otherwise it looks like a classic exponential curve with a doubling time of about 6 years.  At this rate, by 2063, the entire 80m population of Germany (the second most common country of origin after Spain) will be turning up in Galicia looking for god, a good time or themselves.  In most examples of (quasi-)religious practice in the West - Mass, Singing Workshops, Meditation Circles, Yoga - women outnumber men by a considerable margin but on the Camino  the sex-ratio is consistently 55M:45F.

The next day, 26/Jul/04, we set off for Fisterra/Finisterre/the End of the World and had the immensely satisfying experience of watching the sun setting into the Western sea while downing a cold beer and imagining what watching the sunset must have been like for pilgrims in 1300 CE when there was no New York, no Barbados and no Samba.  Heck, the Azores weren't there either, not being officially discovered by Cabral until 1431.

A couple of days after that The Boy continued up the coast looking for places to surf and I resolutely turned East for France.  If I was expecting a quiet and contemplative walk such as I had experienced walking alone up the coast of Portugal 15 years earlier, I was quickly disabused.  I was travelling back along the Camino Frances, the pilgrim motorway and I was met by, and had to weave and jink my way through, a tide of humanity. 70% of the pilgrims who arrive at Santiago have come along the Camino Frances, and as I reached the Pyrennes in the beginning of September, I met and saluted pretty much everyone who arrived in Santiago in August (N=46000) and September (N=23000).  That's (23000+46000)*70% = 50,000 times  bom dia, buen camino, bonjour, G'day, Gruß, Que tal?, dia duit.   The last greeting reminds me that St. James's Gate, Dublin, where Guinness and StJs Hospital are, is where Irish pilgrims gathered to set off together before Ryanair made it all too easy to goon on pilgrimages.

Nobody met as many different people that summer as I did unless they too were walking contrario, and I met two of them as well.  That's a lot of data and when I finally arrived in France I wrote the whole thing down as "An analysis of the process of pilgrimage".  Nahh, I wasn't such a pretentious git as to call my essay that, but I did write it all down.

I've written before about the Open University (OU), the Royal National Lifeboat Institution (RNLI) and the Jack and Jill Foundation (J&JF); extolling them for nurturing heroism.  We need heroes.  The Camino de Santiago is many things to many people.  The pilgrims can't all be binned as "sincere catholics" or "woo-wah tree-huggers", and atheists are welcome.  But one thing the Camino engenders is kindness.   In a month, I had 50,000 opportunities to share (and it cut both ways) blackberries and water; a smile and a song; a solicitous word; a helping hand on a steep path; a safety pin; a shoulder to weep on; a bowl of pasta and a glass of tinto.  We need heroes, sure, but we can't have enough of kindness. 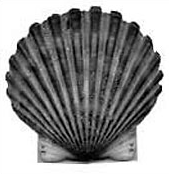 Posted by BobTheScientist at 06:19