On hearing the first 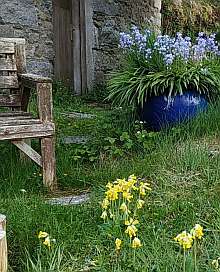 . . . cuckoo of Spring is a [rather dreary] tone-poem composed by Frederick Delius in 1912. Which I won't link for you, because dreary. I did, however, do that thing this morning at 0525hrs: hear the first cuckoo. On Thursday I saw the first pair of swallows swoop through the yard scarfing flies. I tell ya, it put a spring in my step as I strode back in to record the data on the kitchen calendar. It is reassuring when the cycle of life continues to turn - the End of Days isn't here yet.

I was up and out with the first cuckoo because I was letting the sheep out from the haggard where I've been sequestering them at night these last tuthree days. The ewes are <surprise!> yeaning on us in a most desultory and ragged-arsed manner. The Beloved bought three ewes for Paddy the Shear at the end of last year to make up numbers for the annual DAFF sheep survey. Paddy said that they had been with the ram and so there were probably bonus lambs within . . . due on Patrick's Day. How could he be so confident about the date? Because he's the farmer! Real farmers limit access for sex to a two week estrus cycle, so a) every ewe gets a chance b) any lambs will appear in a finite window 5 months later. Lambing is a sleepless business and, while any parent knows that you can tolerate broken nights for a fortnight, years of them will adversely affect everyone's mental health. The other ewes were not preg because, with commitments to elder-care we've been unable to guarantee being at home for 14 consecutive nights 5 months from whenever.

It's not worth calling in the scanner for three 'confirmed' hits, so we didn't. But rather girded loins for mid-March delivery. But all these planned certainties were incorrect. I noticed that one of our older sheep was sporting a full elder maybe eight weeks ago and filed that information [what do I know?] to the very back of my mind. But a tuthree days later, a neighbour came by and confirmed that a) none of Paddy's ewes were due any time soon; but b) three of ours could drop lambs any moment. He squeezed a generous gob of colostrum into the air to prove the assertion. Several of the others were maybes. A couple of weeks later he returned to confirm that 13/16 of the ewes would be delivering something this Spring. He also took the two most preg ewes off to his birthing barn to give them their best chance of a safe delivery. Those ladies are back with the flock with two strapping big ram-lambs at foot.

2021 is the year our neighbour-above decided to let some of his ewes lamb in the 12 acre field immediately North of our house. How did we know? because twice a night in the full dark, he'd drive up the lane with his jeep and >!RATTLE-RATTLE!< trailer and career about the field checking the ewes in his headlights. The trailer, we surmised, was essential in case he had to re-patriate any sheep to his home place the other side of the mountain. For me, I've decided it's easier to check the ewes in the dark if they are in a fenced enclosure abutting the house rather than ranging over 5 hectares of fields, ditches and bushes with a flashlight. After several nights of this, there is little pick for them in the haggard - they refuse daffodil greens but have finished the wild garlic - so it's a courtesy to let them out as early as possible for breakfast.

Spring is the most dangerous time of the year.: the bull rushes [Scirpoides holoschoenus] out; the cow slips [Primula veris] about and all the buds are shooting. We have a wonderful bright crop of cowslips in the top [R] corner of our yard.