I had a swipe at the New England Aquarium & Sy Montgomery for keeping an octopus in solitary confinement, which might seem a peculiar position to normal folk who see octopus as, say, food. I've written quite a lot about ethics over the last eight years; concluding that ethics is hard.  If you are complacent about your ethics it's because you haven't thought about it enough. There are few, in the Western world, who condone slavery but plenty who think that professional boxing (licenced and regulated battery for profit) is an acceptable sport. It's not: just count the concussions and contact sport encephalopathy. 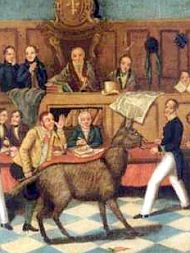 I don't know about you, but IF we agree that all people have human rights - regardless of colour, age, gender, sexuality or wealth - THEN it's difficult to draw the line at the edge of Homo sapiens and say that chimps don't have rights. I'm not, here, talking about prevention of cruelty to animals which was promoted and sponsored by some Victorian eccentrics, like "Humanity Dick" Martin, because it was bad for the immortal soul . . . of the perpetrator. Like Jeremy "Utilitarian" Bentham: "The question is not, Can they reason? nor, Can they talk? but, Can they suffer?"  Let's rather think about the Right to be Let Alone for chimpanzees.

Actually, forget about chimpanzees, they are largely beyond our control in forests or zoos. Let's think about dogs [and cats]. What are their rights? Actually what are our rights to own a dog? If Genesis 1:26 "And God said, Let us make man in our image, after our likeness: and let them have dominion over the fish of the sea, and over the fowl of the air, and over the cattle, and over all the earth, and over every creeping thing that creepeth upon the earth" is sufficient then you really haven't thought about it enough.

In Ireland you're meant to licence your dogs [at €20/yr!] but apart from that anyone can own a dog - no requirement to be tested or examined as to competence. Virtuous people truck off to the local animal rescue to recycle a dog that has been abandoned and/or abused by the previous owners. The better class of rescue & re-homing centres have standards equivalent to human child adoption agencies. But [unfixed] bitches gonna pup and if you want a dog you can get a dog - and I have never been asked to show a dog licence over hundreds of hours of walking dogs. So many dogs, so little oversight.

The better class of owners will do their best to train their dog, and good for them. But my feelings about dog training has been coloured by Sy Montgomery's tales of training her dogs to stop, go, come and catch frisbees. I did a year of psychology in college and I know that using operant conditioning you can make animals do all sorts of mad antics: catch frisbees, jump through [flaming?] hoops, walk on two legs and come when called. But the dog? In what sense does it consent to this contract? With chimpanzees, the sense of the meeting in modern ethics is that we should treat them as well as, and with the respect due to, people. When, in 2005, we wanted to extend an evolutionary study of the human immune system to look for/at the equivalent genes in chimpanzees we were (quite properly) told to bugger off with any ideas about a blood sample. Because the chimpanzees in the local zoo were illiterate and therefore couldn't read and sign the consent form.

It's interesting that the word "grooming" has been borrowed from domestic animal care to apply to the mechanics of achieving gratification in another, seepy, repellent, world where the balance of power is really unequal. Consider whether dogs are being groomed to accept their enslaved state by treats, attention and walkies. Or la la la can't hear you - that will work also.

Me, I don't think it's cool of Captain von Trapp to dress his kids in sailor suits and come to a whistle. Ditto dogs. It's not so long ago, that powerful people in the USA could own slaves. The right of married Irish women to refuse sex with their husband was not vindicated in Ireland until 2002. I think the tide of history is running with me on this one. We've freed the gays; now to free the hounds.