Here [L] is a picture of Polly Higgins talking at TEDxTallinn 2013 about corporate law now; and a future where making money for share-holders is not the legally privileged goal. She's been a fighter for the oppressed since [before] as a teenager she laid out her art teacher to stop him being violent to smaller children. That was the end of her with the Jesuits but she found a more comfortable billet in another place and went on to study at the universities of Aberdeen (BA Cultural History), Utrecht (Dipl Semiology), Glasgow (MA Decorative and Fine Arts). Later, she must have realised that it's damned hard to live on the whiff of aesthetics, so she returned to school at City U. London and the Inns of Court to qualify as a barrister.

I take the view that the history of civilisation since, say, Napoleon has been the curtailment of  the freedom of The Strong to indulge in heedless cruelty against The Weak. It is no longer legal or socially acceptable to . . . 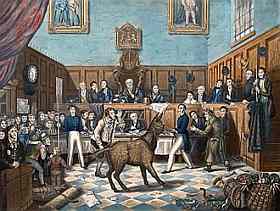 The first law against cruelty to animals the Cruel Treatment of Cattle Act 1822 was sponsored by an Irishman <huzzah!> from Galway, Col Richard "Humanity Dick" Martin who was appalled by the treatment of cattle being herded for slaughter at Smithfield Market. He didn't like cock-fighting, bear-baiting or dog-fights; nor the use of pit-ponies down coal-mines either. But his first prosecution was against Bill Burns a costermonger who was cruel to his donkey [L said donkey as witness for the prosecution 1822]. The British SPCA was founded two years later and a steady widening of the remit of cruelty to animals ensued to include anything bigger than a breadbox with a beating heart that lived in Britain. That's a rather comfortable attitude to breadth of the law's concern. If it's not happening in your town, then anything goes.

It was okay with The Patriarchy if the only people who went out to Africa to shoot lion were my / your cousins Rodney and Willoughby who were crack shots and rather decent old coves: never known to bilk the tailor; could hold their liquor; didn't cheat at cards. The case was altered if the killers were black, once-upon-a-farmers who had picked up an AK-47 in a local conflict and knew a man who knew a man who'd hand over folding money for a rhino horn. So now we have international trade laws that prevent the sale or export of wild animals, or parts of wild animals, dead or alive. If you can square your conscience with the export of live (or dead) sheep while huffing and puffing about the trade in crocodiles or mink coats you may have been educated by the Jesuits. I can't see the difference myself but then I eat meat and my moral compass spins like a top.

And it's not just animals. A tycoon from Singapore was just acquitted in a case of illegally trafficked rosewood logs (Dalbergia maritima) from Madagascar. The SG Court of Appeal went all lawyerly on the words in the Endangered Species (Import and Export) Act to hold that it didn't apply to Mr Wong Wee Keong because the logs were in transit to a final destination rather than imported in to Singapore. It's taken 5 years to get this far and the lawyers are all a bit richer and Mr Wong's bottom line is a bit dented. Who knows what will happen when the shipment reaches its destination in Hong Kong?

Mais revenons a nos Higgins! After qualifying and marrying another lawyer (who went on and up to become a sensible&sensitive judge on the West of England) Ms Higgins had a successful career defending people in court. After a long drawn out case, she looked out of the window and had the epiphany that The Earth herself needed a lawyer.  She packed her black gown and silly wig and assumed the mantle of Gaia's attorney, campaigning to add a 5th leg to the platform from which La Cour pénale internationale aka the International Criminal Court (ICC) utters its judgements. To genocide, war crimes, crimes against humanity and crimes of aggression, Higgins et al. wished to add Ecocide, so that the court could deal with issues beyond man's inhumanity to man.
A lawyer's definition of Ecocide: "loss or damage to, or destruction of ecosystems of a given territory such that peaceful enjoyment by the inhabitants has been or will be severely diminished." Which is worryingly centred on the [human] inhabitants - like the Yanomami in Brazil after the loggers bulldoze a few hundred hectares of tropical rain-forest for a McD's cattel ranch; or the Magyars who lived down-stream from the collapsed Ajka caustic red mud holding pond. It lets you off for mowing your lawn to an inch of its life; lets Ireland off for the list of ecochanges bulleted below.

I'm very sorry to report that Polly Higgins died on Easter Sunday peacefully after a brief dust-up with terminal cancer in Leckhampton's Sue Ryder Hospice. She was only 50 - a lot done; a lot still to do! She will be buried in Slad Gloucestershire on Friday 3rd May. That's where Laurie Lee [prev] is buried and where m'sister was married. Indeed those two women were friends and allies in the local branch of There's Got To Be Another Way or Holding the Planet or Borrowed From Our Grandchildren. I understand there's going to be a mighty party, awash with organic whiskey, after the funeral, at the Woolpack.

For someone [that would be me] who believes that a very large proportion of the evils in the world stem from there being a) too many people b) too many rapacious millionaires; it is A Good Thing that at least the millionaires and their enterprises can be held accountable for the damage they do in their pursuit of money: either by casual inattention to what's going on around their places of work OR carelessness about the by-products and spoil from their place of work OR by taking so much that what's left is a pale shadow of what was there before the take. All of these sins of omission and commission would qualify as ecocide  if such a concept existed in law - it doesn't . . . but not for want of Polly Higgins trying. In 2011, a bunch of lawyers borrowed the UK Supreme Court in a mock trial of Oil Company Execs over their depredations in the Athabaskan Oil Sands and The Gulf Oil Disaster. If the Ecocide Act was law, then the Oil Sands Suits would have been found guilty but the Gulf Oil fiasco (Louisiana shrimpers notwithstanding) would not.

Finally lest we feel super smug in a nothing to see here way here in Ireland, you should listen to this podcast of Padráig Fogarty of the Irish Wildlife Trust, explaining how we have collectively and completely changed the landscape of Ireland, since the 1970s:
As it's Easter 2019 [in Athens and Kiev anyway] let's paraphrase Willie Yeats the Patriarch:

Now and in time to be,
Wherever green is crying,
Are changed, changed utterly:
A desperate spectre is dying.
Posted by BobTheScientist at 07:27