Polpo in the Park

Our Man From La Mancha was telling us the other day about the ermita (hermitage) beside the river a few km to the South of his town. The chapel was founded there because a stone head of "The Virgin" (Venus? Juno?) was found in the river. On certain days in the late Spring, the faithful of the town (and a lot of hangers-on) carry a statue of La Virgen del Buen Parto from the parish church to this peripheral holy place. Buen Parto - safe delivery - has echoes of St Brigid in her guise as guardian of fertility and childbirth.  Having arrived they have an enormous picnic and a lot of drink, and the young people party into the wee hours.  In the old days they used to sleep out there in the fields and I daresay some of them practiced a little fertility testing.  That story transported me back to the Summer of 2004 when I was trudging through Spain.  I stopped in a small and ordinary town in La Rioja, where the refugio de peregrinos was situated in the attic of the parish church.

In the early afternoon, I was sacked out on a mattress on the floor writing up my journal when the parish priest heaved himself up the stairs and announced in Spanish and French (which I translated into English), invited all present who were willing to come out into the country and share in the annual picnic at a shrine about 2km out of town.  Who could say No to such an open-handed offer? Charity was embodied in that priest who, speaking for and representing the entire village, invited a handful indigent strangers to share in their annual celebration of community and good fortune.  There, under abundant shade trees, we put together and put down an unforgettable meal of simple things: a mixed salad, hot potatoes and chorizo, bread, olives, wine.  Octopus was boiled over an open fire, cut up and sent down the table on a board and out to neighbouring tables.  At the end of the afternoon, having been unable to refuse any of the food that was urged on me, I was barely able to move but the same priest was happy to drive us back to our temporary home. 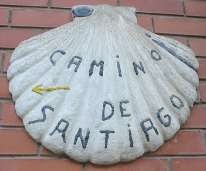 That evening, happily acting the part of El Gordo de la Concha, I was sitting at a table in the refugio talking intensely about The Way with someone who looked suspiciously like JC himself. Up the stairs staggered a disheveled young Italian, looking like a quattrocento condottiere lucky to have escaped with his life from a sudden ambush.  He shrugged his rucksack to the floor, and slumped into a chair at our table, so drained he was barely able to speak.  I asked if I could make him a coffee and he croaked that he’d prefer water.  So I got up and fetched a glass from the kitchen and pushed my half full (never half empty on the Camino) bottle of water across to him.  Between sentences elaborating the tribulations of the long day in the broiling heat walking too far, too fast, “my” litre of water disappeared.  Someone else showed him where to sleep and carried his rucksack to an available mattress.  Much later that evening, after rest and food, he sought me out and shyly apologised for what might have seemed like a gross breach of quattrocento good manners.  “When you are exhausted, all you can think of is yourself”.  And my reply was “Gabriele, being exhausted is a common enough condition hereabouts; if we cannot share water, then that is the end of camaraderie, conscience and the Camino, all”.   But I was only able to utter such a sententious phrase, only able to Do The Right Thing for him because earlier in the day the plain people of La Rioja had done the same for me.
Posted by BobTheScientist at 07:01