They also serve [dinner] who only stand and wait. At the end of April I planted out a few handfuls of haricot beans saved from last year, which sprouted on All Fool's Day. Back then, we were scavenging wild garlic for our ration-of-greens and still anticipating a last late frost. The frost came in May and scythed through the outdoor kitchen gardens of many of our friends-and-neighbours <shakes defiant fist at the sky-gods>. But our beans were cosy-up in the polytunnel and starting to need string and stakes. We are now at peak bean and I am on my knees and up a ladder every tuthree days picking the harvest. At the beginning of last week I picked two canvas bags full: the choicest 3 lbs [=450g, garden produce is packed Old Style] we sent to our neighbours and I chopped and blanched the lumpier lads for the freezer [4 x 300g packed in oval soup-tubs]; and I made three meals out of that harvest.  Then on Saturday I went at it again: 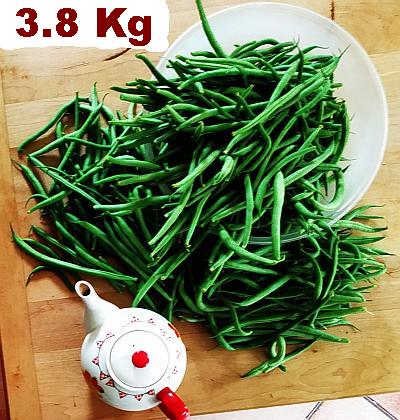 I include a tea-pot for scale. On Sunday, I was up the ladder again because the weight of foliage (and more beans) had broken one of the supporting strings and I had to jury-rig some more rigging. This variety of bean will happily grow to 4.5m (the height of the polytunnel) if string and sticks are set for support. We now have a wall of beans . . . for nothing. The peas which we bought in a garden centre for ready money have been pathetic. It would have been far better to invest in Cap'n Birdeye's frozen peas and leave room in the garden for anything else. 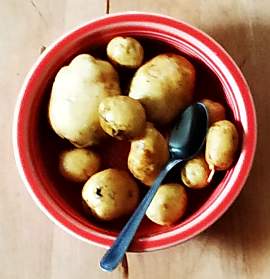 At the beginning of May, as an experiment, I planted the sprouty end of two potatoes into a couple of feed-sacks half full of compost and filled the bags up with straw as a mulch. The results [R with a tea-spoon for scale, is the harvest from one half potato and 13 weeks of time] are better than peas, much worse than beans. 10 potatoes mostly tiny is a meal for two. I think I'll try that again next year though. It's like no-dig [=lazy-arse] spuds where you lay out the potatoes on any convenient patch of ground and cover them with a generous layer of straw. We've tried that in prior years, without a great deal of success. I think that paper spud-sacks are better than plastic fertiliser sacks with holes cut in the bottom. I can imagine it getting really sweaty and mycelial inside an air-tight plastic sack even if the top is open. But do not <spill alert> at any stage, attempt to move paper sacks filled with damp compost. Note to self :try both next year.
Posted by BobTheScientist at 07:43