Did I say I spent a couple of hours of a Sunday evening struggling through thigh-high vegetation with five of my neighbours? I did. Did I have fun last Summer tooling across the same landscape clocking aspects of the built environment with my new GPS-enabled smartphone. I did. The local management put these two facts together and volunteered me to record the vertices of plots of vegetation suitable for controlled burning. Accordingly around midday Friday 24/07/20, I was up on the hill again with my GPS tracker/camera and the Suitable Vegetation Liaison Officer SVLO. You may call me Bob the Cartographer.

Surveyors used to measure distances across country with chains of 22yds, wch do be an hand's-breadth above 20 french metres. We were trying to locate areas or about 1 acre which do be nigh 70yds x 70yds: manly paces do be enough for accuracie. The deal was that we'd agree the corners of an appropriately sized quadrilateral and I'd take picture with my Location-on-Photo App. Then I'd go home and transfer the GPS Lat- and Longitude to an Excel spreadsheet. Good plan, but about halfway through the process, I contrived to disable the Record Location option, so I had several photos of a stick-in-a-bush. Also I ran out of sticks. But we had some data and a better idea of how to do the job properly. And we'd agreed where the squares were going to be,

When I got back to base, Dau.I [home for a week being a) useful b) good for morale] explained with infinite patience how I'd probably managed to disable my GPSness and what to do if it ever happened again. I couldn't for shame let a day's work be half-finished so after dinner I put on a bright yellow shirt and set off to re-photograph the missing sticks: 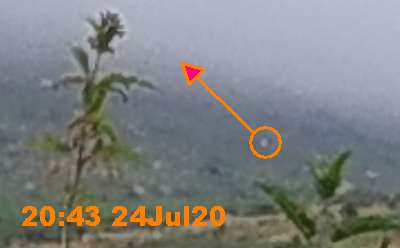 I had also cut a red&white plastic shopping bag into strips to add a gonfalon to the top of each stick so that they would be actually visible rather than a Where's Sticky sort of children's game.Dau.I and The Beloved went for a gentler post-dinner walk and captured me as two pale pixels [above] heading off into the cloud-base. It was a bit eerie but with visibility down to about 30m it was rather satisfying to find each stick looming out of the background in the expected position. GPS don't mind a bit of mist so I was able to capture the coordinates of the two highest [of five] squares for the 2020 season. On the way down I was able to find and add a streamer to 3 or 4 of the lower bamboos.

But when I plotted the days data, it was all ahoo': 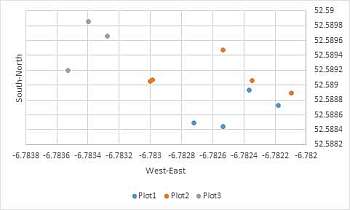 The top left triad Plot3 are the last 3 points before I switched off the GPS recorder; but the Y-shaped  vertices of Plot2 are clearly some sort of error because they enclose nothing substantive. And Plot1 is much nearer to half-an-acre than the full shilling.

Accordingly, I agreed to go up the hill again at Saturday midday. That was my 4th trip in less than a week. There good news is that we were learning how to do the simple task of mapping points on an ocean of heather, ferns and bushes. This time we both independently brought strips of plastic flag. Things were proceeding apace until, crossing a bushy, rocky draw between two sticks I fell headlong into the heather. When I arrived at the next flag - no smartphone! It took us 20 minutes of casting about on a strip about 2m x 40m to locate it. It's not a "phone" because my Sim-card is in my Nokia 3310 button-phone, so my neighbour couldn't call it; and unlike my Nokia it is not  bright yellow . Losing the instrument is bad; but losing the data in the phone compounds the disaster. We also took the opportunity to expand Plot1 so it was nearer to the stipulated 0.4 ha in size. Finally we moved on to another face of the hill to start plotting another set of squares for burning.

The hillside, unless you are a Mohican tracker, looks quite uniform but, like the ocean is criss-crossed with sea-ways, is effectively a network of pathways. Unconsciously sheep and people go Wenceslas in the tracks of previous voyagers: it's easier going. I was delighted, but not altogether surprised, to find >!taRAAA!< the plastic water bottle cast aside in frustration by a different neighbour 6 days prior.
Score lost: 1 water bottle, 1 GPS tracker -- found: 1 GPS tracker, 1 water bottle.
Achieved: re-plotted and re-tagged 3 for-burning plots. Plotted another square for 2021.
Posted by BobTheScientist at 07:31