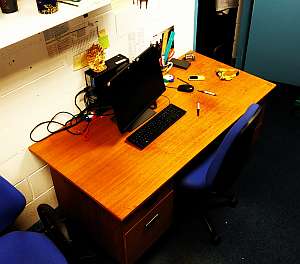 As I said, I went in to The Institute, my employer for the last nearly 8 years, to hand in my Pension Papers. Because of astute forward-planning on my behalf by our Pension Guru, in 2017 I was requested and required to consolidate my Superannuation Entitlement for working at UCD and TCD in 00s with The Institute's entitlechunk. That way I'd get one Irish Third Level Education pension to add the State Pension.  This is what I've accumulated

It looks like I haven't worked a lot but that's partly because I worked through the 1990s in the public sector on short-term contracts when there was no obligation to pay-forward to The Future unless you were permanent-and-pensionable. It's also because I was in the USA for 4 years, NL for 1 year and in UK for 7. That's nearly 40 years totes.  If I had been reg'lar and worked 40 years, I'd be effectively on half-pay after retirement. As it is I'll be coasting along on 1/5th pay  . . . + the standard OAP, as well. So we'll be a'right; there will be chocolate biscuits if the grand-children are ever allowed to visit. Numerate me wonders about 16.0205 WTF the 5? Reporting that 4th decimal point means it's not 16.0204 or 16.0206 - the working year is 50 weeks x 40 hours x 60 mins = 120,000 working minutes so the bean-counters at Pension-Centraal are operating in units of 12 minutes. Still on the hedge-against-an-uncertain-future front. Between now and 2nd October, I'll have to clear my desk, bookshelves and filing cabinet. I made a start on the last and dumped two xerox-boxes full of 'paper' and one of 'confidential' [anything with a name on] paper. Then [rubber-gloves, lads] I started in on the desk-drawers. Top left was full of old time-tables, crumbs, pen-tops, paper-clips and my in-case-of-emergency stash [on view R]. So many dispirin because I've never had a head-ache at work. The NutriGrain bar in case I had a hypo-glycaemic crisis [not neither] - it was given away for free at some promo. I would never buy such a thing; there are 27 (!) ingredients. I'm not sure about the sugar, I think I just half-inch a couple if it looks likely they will be swept into the bin in the post-function clean up. If I want 5g of sugar in my tea [and I often do], I have a small jam-jar of the stuff which I bring from home. I know you're meant to throw the spoons away after one stir, but I never do.

I was telling Dau.II about the sugar packets and she was ribbing me for never growing up. And it's not as if I lived a childhood of penury when an orange at Christmas was a big treat. A few years ago, she took her bloke for a weekend away at a posh hotel in Killarney. As they were packing up to leave, she lurried the individually wrapped Barry's tea-bags and the shower-cap and the dinky shampoo bottles into her bag [þe apple falleth not far from þe tree]. Her bloke was aghast "Why are you doing that? We have a whole box of tea at home and you've never worn a shower-cap in your life". I have expanded on the ethics of such light-finger behaviour before.