I was talking the Radical Dau.I midweek. She calls sometimes when she's cooking; I hope she's up for the multitask and not burning the rice while correcting my pronouns.  My pronouns {ho|hum|patriarch}are something I'm working on. Here's an example of Matt "Math" Parker using the singular-they when referring to both ♀ and ♂ mathematical geographers. That's both conscious and conscientious and one of the powers that celebs have: to change the quality and direction of discourse - here for the better.

I was in The Institute twice in the last 8 days clearing me desk out and printing a few things that needed signing including marks for my last two MSc students. I came away feeling really rather light-of-step as the loose ends of nearly 8 years were plaited up and made ship-shape and Bristol fashion. While on campus I bumped into a palomino and commiserated with them <sic> about learning how to teach "on-line" and the fact that if a physical-distancing lab class is half full, then the students are going to get half an education. Actually, as any home educating family will tell you, that's bollix. Piling content [let's verify Avogadro's, Bernouilli's, Charles', Dalton's, Euler's, Faraday's {see R (left!)}, Gay-Lussac's, Hooke's, Ingersoll's, Joule's, Kirchhoff's Laws] does nothing towards understanding scientific principles and nothing towards helping kids come to their own understanding of the natural world. But contact hours is the currency by which The Institute runs.

I was relating this anecdote to Dau.I and we came to the conclusion that IF profit making educational institutions were driven by bean-counting of this nature THEN they should be discounting fees in the next academic year to the extent that they are short-changing the students of their <effin'!> contact hours. "Ain'ta gonna happen" we agreed, because of the intrinsic asymmetry in negotiating power between The Man and Reg'lar Folks.

We then compared notes on how the hope of a silver-lining to Coronarama [end of Direct Provision; Universal Basic Income; tiny homes for all; minimum wage => living wage; adequately resourced hospitals / sex-education / special-needs / dentistry / diversity] has bled into the sand of another centre-right government coalition who want to get back to the cosy status quo ante where politicians fix things for their pals and are deaf-dumb-and-blind to the dispossessed . . . The Others.

The status quo mentality would rather spend money on lawyers than apologise for mistakes. The Man will come out fighting for a peculiar, particular vision of how things are rather than asking how things should be. The Dept of <Orwellian Newspeak>Justice </Orwellian Newspeak> is now compiling a database of Direct Provision dissenters, rather than allocating resources dismantling or humanizing DP. [And it's not just the DoJ] DP is where human beings are stacked while the wheels-of-law decide whether they are Gay Enough to be a true asylum seeker rather than an economic migrant. There must be some BLT folks in the DoJ. What say we send them on a feasibility study to experience being Gay in Ghana. There must be some folks in DoAg who enjoy rashers and steak, they could have a week of work-experience in a meat-packing plant in Kildare . . . and not as a €65K/yr inspector with a clip-board and a hazmat suit. 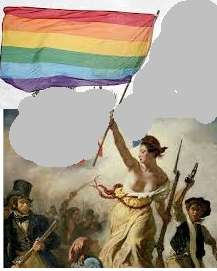 I offered that, if she mobilised her BLT cohorts all gleaming in purple and gold-lamé, I'd let them drill in the woods [free flap-jacks ad lib] against the revolution that's coming immediately after this plague year allows free movement. We agreed that, natch, these Soldiers of Destiny would be called The Monstrous Regiment. It is lamentable how little common-ground there is among the various groups of the excluded. When I was Dau.I's age, Trades Unions would be committed to all kinds of social justice often wholly off-topic to their mandate. Now her union and my union have retreated and consolidated to protecting the rights and privileges of their government-employee members. I've lost two days of my pension 'entitlements' because my union had two days of wholly ineffectual strike 'action'. That was the limit of the pain that the membership were prepared to take to right the wrongs that led to the strikes.
Posted by BobTheScientist at 07:17