I'm an institutional[ized] kinda guy; that's why I've been happy working at The Institute these last several year. The day, the week, the term, the timetable is so busy that I have little time to be idle at my desk waiting for the next event. I have been in other academic posts where I was expected to adult-up and be responsible for running my own day, week, term, timetable. I didn't cope well and it was the least productive time for which I got paid a salary. In the late 1990s, I told one of my colleagues that I was a really good post-doc[toral] researcher: I was hard-working, dogged, not stupid, dependable and painstaking but I wasn't interested / capable of running my own lab. Part of that was a reluctance to be responsible for the health, welfare and success of people under my care.

Interestingly, that same colleague believed my patter and a tuthree years later hired me to work in his new edge-cutting multi-million €$£ research lab. The was he explained this eccentric decision was that he wanted at least one known quant in the multinational mix whom he hired to push the frontiers of science. In more or less the same month [the Celtic Tiger was starting to leak science-bucks], I was hired to work in another lab to supervise a post-graduate student whose project was at the interface between computational biology [me] and innate immunity [The Gaffer]. In the hiring interview she said that the student welfare/thriving buck stopped with her - she de Gaffer - and that I should just concentrate on wrastling the genomes into submission. Working in two different fields in two different labs at the same time was - tiring, energising, creative and interesting. There was a surprising amount of cross-over and complementarity. 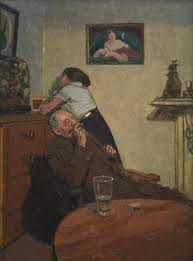 My correspondent G sent me an article from the New Yorker about the science of boredom. I found it difficult to relate to because I'm never rarely bored . . . nowadays. But I guess I'd y-a-w-n be all over it with a dull of recognition, if it was 1988 and I was gazing out of the window waiting for lunchtime. It's worth reading, even if you're not prone to being bored yourself. It will give you insight into the Lives of Others who are less well set up for amusing themselves [Ennui by Walter Sickert L]. As a few experimental psychologists are involved, there are some nifty ways to induce boredom:The outcomes seem to require measuring the consumption of junk-food as a consequence of being bored. The take home seems to be that you'll likely be bored if what you are doing is a) monotonous AND b) of no interest / value. Playing Grand Theft Auto is of no interest / value but it would be a peculiar person who was bored by the proxy-mayhem. Contrariwise, I am quite happy tallying up pages of data or repetitetitetitetitively making thumbnail pictures of our incoming students. It's monotonous but when you're in the zone, the time passes and each page is box ticked. There's a lot of that in science: carrying out a protocol reliably, repetitively to acquire data to test a hypothesis is an important part of the process.

What's your boredom threshold? You can measure it if you have the patience to answer 28 [twenty-eight!] not very interesting questions. I found
You don’t get bored easily.Well I knew that; I have The Blob to put to bed each and every day. But the case would be altered 32 years ago. BBC: why boredom is good for you. Grauniad: why it's good to be bored.