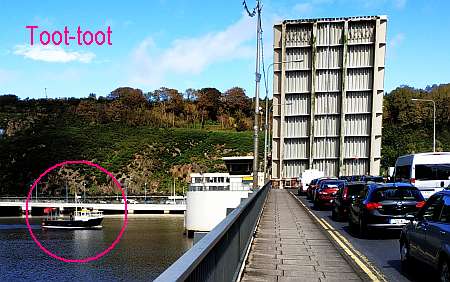 I was heading back to the hills from Costa na Déise on Thursday after lunch with Pat the Salt. If I'd left 3 minutes earlier I would have got across the Rice Bridge without delay. But as I came down Bridge Street through Waterford City the crossing gates came down and a couple of minutes later the bridge itself came up and exposed its bottom to everyone on the quays. I was quite excited because, unless this was a fire drill, something nautical was about to steam through the gap.  I looked up-stream and down-stream hoping for a ship  . . . and all we got was a little fishing-boat which pootled down-stream about its important business.

Almost everyone sat in their cars because . . . actually I can't think of any good reason why someone would sit in their car on the first sunny spell of the week when there was this Event unfolding before their eyes. I can't accept that all the Déiseans were all bin-there-seen-that-and-I'm-in-a-hurry because it must a rare event. I've been crossing the bridge for the last 30 years several times a month and waited for hours at the Bus Station down the quays a piece and that's only the second time I've seen the bridge up. Ferries are The Biz, but lift-bridges are an acceptable substitute and free.