It's a bit early for Talk Like a Pirate Day, so I must be on some other tack; and I am. It's about logistics, and Mahommed and the Mountain. I promised myself I'd give Coronarama a rest for a while especially on the sounding off front . . . especially after I got the trumpet shamefully offkey. Well, it's been a month so I am going to get back gingerly into the saddle on the matter of testing. This was brought into focus by a remark from Dau.I that someone in Dublin had been refused entry to a Covid Testing Centre because s/he had no car to sit in while waiting for the call! That's what seems to be the score in our GP practice as well; although I'm sure there are families that live car-less in town and walk to the GP if they need to.

Then Dau.I, who was always a bit weak in the wind, had a persistent sniffly <coff> before the weekend and called in a sickie at work. The nurse at her doctor's practice said that she'd refer her for testing at the Aviva Stadium's Covid Testing Centre and not to bother coming into the GP. It took 2 days for the paper-work to e-travel from the GP to the testing centre but only 2 hours to get an appointment for swabbing. She was still feeling crook but, not owning a car, didn't see much option about how to make the 5km journey but walking or cycling. Taxis or scabbing a lift off a pal seemed to be more hazardous especially if she was actually Covid+. That can't be right! . . . that really quite sick people are required to present themselves to the Test Centre on the other town. 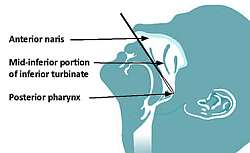 I speculated that, if enough people were trained in naso-pharangeal swabbing, then they could go off with a bucket of cotton-buds and a list of Eircode addresses and get the samples at source rather than having loads of sick people wandering around town like a zombie apocalypse. These roving testers would presumably be served by a top-flight travelling-salesman algorithm, so that they could do their quota of tests in the most efficient manner possible. How hard can it be? Whatever about hard, it defo needs to be deep - halfway to the ears! When I worked in TCD in the 00s, the Effectives were always at me for 10cc of blood as a "control". My pal Jean, recognising an unmet need, got herself trained as a phlebotomist, and over the years got quite familiar with the crook of my left elbow. Finding a vein cannot be less hard than finding a nostril, surely. I gather there is a bit of a problem with swabbers being too tentative when they go for a deep ream out: SARS-CoV2 prefers a deeper nest than other "respiratory" viruses. Obviously, the tester would need some wheels, and some PPE, along with the training. But if Deliveroo has send a 3 course meal out by bicycle, BikeTesterrrrrs ®©™ can transport their bucket of swabs on two wheels.

That all became a bit nugatory when I re-read a NEJM paper Swabs Collected by Patients or Health Care Workers for SARS-CoV-2 Testing which compared the results of testing swabs taken by untrained people with those taken by professionals. There wasn't 100% agreement, but people can get a good enough result more than 90% of the time and it's generally less eye-watering if you do it yourself than if you get it done by someone on piece-work. We know already that, quite apart from agreement / reproducibility, no test [neither PCR nor antibody] can legitimately claim 100% sensitivity nor 100% accuracy. So whatever result Dau.I gets, it should be treated as indicative rather than definitive.

I doubt if the HSE or Covid-Centraal is going to authorise self-testing at the sick-bed. They will believe that too many people are prepared to game the system by swabbing their sick neighbour's throat and claiming bennies or a few days off work. Like Withnail providing a urine sample by-passing his own bladder.

Posted by BobTheScientist at 09:18