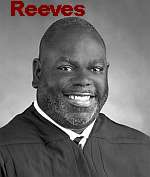 One of the cornerstones of the Black Lives Matter movement is that police officers play the qualified immunity card when brought to book for outrageous, even deadly, assaults on the constitutional rights [life, liberty and the pursuit of happiness etc.]. QualImm is the doctrine that, while law enforcement may make <ooops s/he dead> mistakes, if they honestly believe they were in the right, and especially within the law (not the same thing at all) then they cannot be prosecuted. The US Supreme Court = The Man in all his conservative patriarchy, has steadily increased the blanket of QualImm to cover ever more egregious assaults. It seems like the are no limits to what cops can do to poor folk with their guns, night-sticks and asymmetrical power. On Tuesday 4th Aug 2020, Carlton W Reeves a Judge in the Federal District Court of Southern Mississippi upheld a plea of QualImm in Jamison v McClendon but wrote a magisterial relentless 72 page opinion inviting SCOTUS to overturn his judgement because Qualified Immunity has become the tail that wags the dog of natural justice. tl;dr: Officer McClendon stopped Clarence Jamison in Pelahatchie, Mississippi because he was driving a Mercedes convertible; detained him at the roadside for 2 hours and did $000's of damage to the car searching for cocaine. Mr Jamison did not get shot.
A review of our qualified immunity precedent makes clear that the Court [SCOTUS] has dispensed with any pretense of balancing competing values. Our courts have shielded a police officer who shot a child while the officer was attempting to shoot the family dog; (117) prison guards who forced a prisoner to sleep in cells “covered in feces” for days; (118) police officers who stole over $225,000 worth of property; (119) a deputy who body-slammed a woman after she simply “ignored [the deputy’s] command and walked away”; (120) an officer who seriously burned a woman after detonating a “flashbang” device in the bedroom where she was sleeping; (121) an officer who deployed a dog against a suspect who “claim[ed] that he surrendered by raising his hands in the air”; (122) and an officer who shot an unarmed woman eight times after she threw a knife and glass at a police dog that was attacking her brother. Once, qualiﬁed immunity protected oﬃcers who acted in good faith. The doctrine now protects all oﬃcers, no matter how egregious their conduct, if the law they broke was not “clearly established.” This “clearly established” requirement is not in the Constitution or a federal statute. The Supreme Court came up with it in 1982. (125) In 1986, the Court then “evolved” the qualiﬁed immunity defense to spread its blessings “to all but the plainly incompetent or those who knowingly violate the law.”
Posted by BobTheScientist at 07:42