For the visit me mother over the last bank-holiday weekend and we had to marshall the troops [Dau.I and Dau.II] the night before catching an early ferry. Dau.II arrived first and made herself handy in the garden (her garden in Cork is a pot on basil on the windowsill so wielding a shovel and some secateurs is pure holiday). Sitting over tea-and-a-wedge [of sourdough] afterwards said said she'd been showing a pal some tiny home videos.  I can't find any mention in The Blob archive which is strange because we both have a bit of a thing about living a super-simple clutter-free existence - which would be forced on anyone who chose to live in a box 2.5 x 2.5 x 2.5m (there or there-abouts). The Pal had never thought about that sort of thing to the extent of surfing youtube in search of yet another nifty multi-function space-saving wheeze. 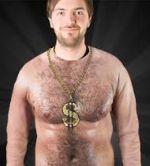 There is a recent voice-of-pundit on Vox which asks "What is something we [all] buy into now that will be totally unacceptable [what were they/we thinking?] from the perspective of 2070?". Peter Singer's contribution was not about trolleology and ethics of being over there rather than here in my face. Rather he thinks that conspicuous consumption will be totally unacceptable [R is a bling sweater as an ironic comment on the practice] in an enlightened future: because everyone will agree that nobs (rich people who show it) are knobs (slighty dopey people who are pitied rather than adulated). If we're to acheive this in the next 50 years we will have to ban advertising which is what creates the desire for stuff that consumes a wholly unsatisfying amount of our income. Take a leaf out of Dau.II's book of life-skills "We lack for nothing. Why, there are four sorts of cheese in the fridge" [prev] there is no way that young woman is going to embrace debt to service the acquisition of stuff. If rich people can think of nothing better to do with their wealth than burn $100 bills in their country clubs on Nob Hill, then there will be a revolution and they will be the first up against the wall . . . to be laughed to scorn for their childish vanity.

Did someone mention consumption?? Other essays in the Vox series includes Melanie Joy's condemnation of Carnism - the pervasive worldview that eating cows, pigs and chickens is, far more than being acceptable, almost an essential part of Western culture. From a chicken in every pot on Sundays many of us would feel bereft if we didn't have something meaty 3 or more times every day. Dr Joy advises that, as we tear into society's acceptable agri-beasts, we imagine eating cats, dogs, giant pandas and koalas. If that's not enough to put a stop to your meaty gallop, you might visit a slaughterhouse once in a while. We take kids on school trips to Coca-Cola bottling plants; it would be unthinkable to arrange a similar visit to Dawn Meats. And nobody has mentioned halal slaughter which is actively targetted by the Western media as inhumaner than the normal acceptable process which most of them have never seen. The presumptive power of the meat 'packing' industry and agribusiness manages to slide the carbon-footprint of cattle [30% in Ireland!] off the table when discussing measures to mitigate climate change! Meat free Monday would be a thin end of the wedge towards more ethical compassionate behaviour which would also help the planet breathe a little easier. In 50 years that wedge might have been driven as far as meat only on Sunday. You'll appreciate it all the more for making it a treat rather than unconsidered calories. I won't, I'll be defo dead in 50 years.

I found some of the other 15 predictions are less easy to assimilate because they forced me to question my certainties
Posted by BobTheScientist at 07:44