I'm ready for Brexit! I won't feel the loss if I never go back to Britland: my commitment is to Project Europe. Nevertheless most of my blood-relatives live across the water, and I/we go there two or three times a year usually by ferry - because we are so righteous about the carbon footprint of air travel <not!>. With time to spare two years ago, I parked [free for the first 20 minutes] in Tenby - a rather civilised seaside resort about 20 minutes from the ferry port. The main attraction of seaside resorts - even the upmarket variety - is the tourist tat shops selling t-shirts and silly hats; fish and chips; seaside rock and toffee; plastic buckets and spades. I bought some welshcakes, some fudge and a couple of mugs with Welsh dragons - partly because Pat the Salt was born in Cardiff 94 years ago this month. 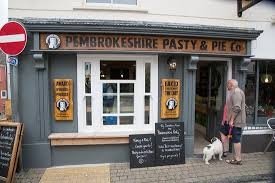 Last weekend Dau.I and Dau.II made a 1 million metre road trip to visit their grandmother. Now that the older girl has joined her father in the public service, she is constrained about taking days off work so we had to go there and back again through Wales in the [long, bank-holiday] weekend. There was only one qualified pilot, but we had both a navigator and a radio-operator on board. Actually we didn't switch on the wireless at all, so we had two GPS competent navigators - who had the grace to operate in turn rather than offering conflicting alternatives.  On the way home, the active-duty navigator started making, increasingly loud, noises about The Pembokeshire Pasty & Pie Company [L above] which has been operating in Tenby these last ten years.

Accordingly, we peeled off the main road and rumbled into Tenby - tums a-rumbling anyway because of all the hot meat pie talk from the back-seat. We parked close to the centre of town and wandered around buying toffee and welshcakes for the folks back home and suddenly there we were right in front of the PP&P Co. I strode in with
"We've come a long way, so these had better be good"
"Just how far have you come?"
"From the A477" which, at 8km, sounds a little less dramatic.

We ordered a couple of mutton and potato traditional welsh pasties and one vegetarian equivalent and went down to a bench near the beach and started our scoff. These things are clearly hand-made: Megacorp QC wouldn't allow for such failures in the pastry envelope or slightly burned bits of leaked filling. But it was all the better for that touch of authentico. I think the lads who started the company had dreams of creating a chain across Wales and across the World but as far as I can see that never happened. Which is fine. Make the foodies get out and find the good stuff.

Talking of Foodies and the Good Stuff, I'll tell you about a new food and photo blog called Nisa's Kitchen mmmmmm Good.
Posted by BobTheScientist at 07:31