That would be today, 21st June, when the difference between sunrise and sunset in the Northern hemisphere is greatest. That's because the tilt of the Earth w.r.t. its orbital plane is at a max and will then start to get less and less until the Winter solstice on 22nd December. See what I did there? This year's Winter solstice won't be on the 21st of anything although most folks think that the 21st is the date.  Sometimes the Summer solstice is on the 20th and sometimes the Winter solstice is on the 22nd. I knew that! . . . but thought it might be chaotic because the calculation involves two incommensurate phenomena - the spin of the Earth round its axis and its spin round the Sun. But I was wrong, the change of time when the tilt maxxes out and starts to fall is really reg'lar: 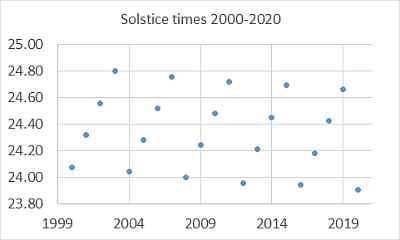 The times on the vertical axis are calibrated in hours after the beginning of the 20th June. The horizontal axis is the dates of this century. Only points above the 24.00 line are happening on the 21st. So solstice this year is at tea-time 15.54 GMT but next year will be just before Midnight of the 20th. As it was in 2008, 2012 and 2016. I abstract the data [from the Grauniad] and do the calcs so you don't have to. A bit more explanation about annual rotations from Blob Winter 2015.

Don't be caught napping! if you miss the Solstice, the sky will fall.
Posted by BobTheScientist at 07:34