It must be genetic: my family segregates about 50:50 between 'high-maintenance' and 'timeless simplicity'. Dau.II leans towards the latter, having no desire for foreign holidays, fast cars or fancy clothes. She left home just before she got the vote and in short order found a place to live, and a job and started to pay a modest amount of tax. She gets paid less than the much talked about 'living wage' of €11.50 but (of course) more than the minimum wage of €9.15. There are few people with more capacity for contentment.  Living wage definition: It is a wage which makes possible a minimum acceptable standard of living. It is evidence based and grounded in social consensus. Consensus gives me the creeps, it smacks of uniformity which makes life so much more boring than diversity. After Dau.II moved into her first apartment in Cork, to express the affluence of their lifestyle, she said "We lack for nothing. Why, there are four sorts of cheese in the fridge". She spends a lot of time in her own kitchen cooking up a storm.  Luckily her bloke has one of those young man's metabolisms that, given a toaster and sufficient butter, can work steadily through an 800g sliced loaf and not put on an extra kilo.

Last week, she was asked to take a week's holiday so that the time-manager could roster more of the newbies and get them trained in before August's madness. They could have sat at home looking contentedly down at the swans on the River Lee and making progress through the cheese, but she got in touch with one of her high-maintenance rellies and asked for the best website for a fancy hotel.
And that's how Herself and Himself finished up having a Summer 2 Night Spa Break at the the Muckross Park Hotel.  As you see from the promotional picture [above] the rooms are enormous and en suite with spectacular views. 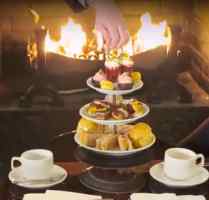 The 2 night deal throws in complimentary limousine bicycles, towelling bathrobes - all the promotional pictures seem to feature fit young people doing unlikely things in white bathrobes like it was a cult initiation - unlimited breakfast and a choice of either one 4-course dinner-for-two or one afternoon tea ditto. They plonked for the dinner but lashed out on the afternoon tea as well to get the full de luxe experience.  Imagine having your tea&cakes delivered by a disembodied hand [L] in front of a roaring log fire: soooo Dracula. The tea deal included a soupçon of fruit compote served in a little chocolate cup as well as more predictable iced dainties and crust-trimmed sandwiches. Pity about the unromantic china cups in the picture, eh? they look like the robust catering-ware that we have in the works canteen at The Institute or that Hans Rosling used as a teaching prop at Lindau. As you might expect, Dau.II and The Bloke were, apart from children-with-parents, the youngest customers by at least 20 years.  But there was not even the slightest hint by the staff that they were some sort of imposters. Working in the catering trade herself, she was able to have a bit of a laugh with the workers, and I think it must have been a relief for all hands that here was a table that wasn't going to be insufferably pretentious about the claret.

A couple of days after they returned to quotidian Cork, we had a post mortem by Skype. I've been to lots of some fancy hotels - always on someone else's nickel as I'm more of a hostel man myself. But most of them concentrate on the facade and the promotional push and let the details, the crumbs and the accumulated scuzz fall where they may. 20 years ago, for example, the best hotel in Athlone was The Prince of Wales which was all Victorian brass and plush-industrial carpet on the ground floor but shabby and worn out [including a dangerous hole in the carpet] after you turned on the landing towards the bedroom floors. My bedroom had a view over air-conditioning ducts and a discarded sneaker. At least the [different] hotel was clean when I was in Athlone again two years ago. Let me report that, as well as perfectly pitched service, The Muckross Park Hotel was spotless for the 24/2 that the kids were there.

A recent biography of Montaigne [bloboprev] is called How To Live ... [reviewed]. I'm still on the look-out for clues to this perennial question. I think Dau.II may be on to something in thus supporting the local economy. Because I know my own business model [bodging, make-do, austerity and less] is more in step with the 19thC than the 21stC and I certainly don't claim it is good for all times and all people.
Posted by BobTheScientist at 07:13