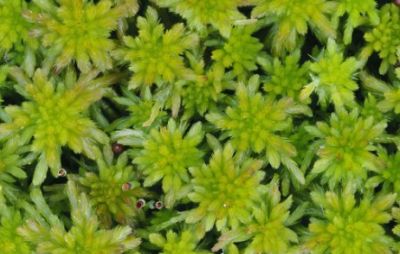 Sphagnum [above a little more than life-size] is pillowing over my awareness horizon because Charles W. Cathcart was mentioned as part of a wikipedia Did you know: tag. There was a time in 1982 when I knew a helluva lot about Sphagnum from a class assignment in graduate school but if you don't use it you lose it and what I now know about moss can be written on a postage-stamp in the 630 words which you are now reading.

In 1982, I was a star-struck groupie of Lynn Margulis taking her eccentric but brilliant course BI504 Evolution. As part of "Organism Day" we were each requested & required to write an essay on any living species - its biogeographical  distribution, ecological niche and evolutionary relationships - and bring an example to class. That morning everyone made a presentation about their chosen organism and took questions. I had recently read a report by Henry David Thoreau (1817-1862) about Gowing's Swamp in Concorde, Mass. That's Henry "Walden" Thoreau [prev]! Accordingly, I borrowed a car and drove out to find Gowing's Swamp [before GPS, maps.google and smart phones] which was behind a school near Revolutionary Ridge. Thoreau (and I) caught the swamp at a snap shot in its transition from a pond to dry land - a process called succession by ecologists. I scooped a little clump of Sphagnum moss into a tupperware container; ready for delivery in class. But obsessive me was unable to determine which of the ~380 species of Sphagnum I might have in my hand. With a great deal of chutzpah, I arranged to take some of it to the world's expert on the taxonomy of mosses, who was a professor across the river in Harvard. Organism Day was a really good learning experience for us students - Margulis realised that content is the least important part of learning in college - process means much more in the long run.

One of the "this is nifty" bits of information I included in my report was the fact that sphagnum was used in WWI as a sterile wound-dressing. It is amazingly absorbant - able to hold 20x its own weight in water. That water is almost always acidic because sphagnum acts as an ion exchange column taking in Mg++ and Ca++ and sending out H+. That acidity discourages a lot of microbes from growing. It also took only 20 years to destroy the copper pipe-work in our mountainy home where the well-water has been filtered through centuries of sphagnum and peat. In addition, Sphagnum cell walls include a variety of phenolic compounds which, like phenol itself and TCP, are mildly antiseptic. Charles Cathcart and Isaac Balfour, the Keeper of the Royal Botanic Garden, Edinburgh wrote an article in The Scotsman extolling its virtues despite the fact that the Germans had been using the stuff for the previous 30 years. In the real-ekonomik of materials in war time, cotton fibres were needed for gun cotton [structure above R] rather than cotton wool AND had to be imported through U-boat wolf-packs AND was less absorbant AND was not naturally antiseptic.  Sphagnum moss otoh grew in abundance across the uplands of the British Isles [they were all British in 1914]. In an early example of crowdsourcing, women and children were mobilised for moss drives to gather the raw material. In Germany this part of the process was carried out by Allied PoWs as well as civilians. The pickers were instructed to box-clever “fill the sacks only about three-quarter full, drag them to the nearest hard ground, and then dance on them to extract the larger percentage of water.” Water is water and it's heavy, so you don't want to schlep it about the world - better to ship orange-juice concentrate from the warm lands of the south and reconstitute from the tap close to final destination.
Posted by BobTheScientist at 07:24