With Brexit turning a new leaf with the departure of Theresa May, there's a lot of talk about the Good Friday Agreement GFA. It's hard to believe that was signed 21 years ago, when I had a lot more hair and was fully committed to the European dream. The easy analysis of the GFA is that it was greatly facilitated by the fact that both parts of Ireland were part of an increasingly homogeneous Europe and so there was no need for a border . . . or  border-checks; security for those border checks; armed British squaddies to protect those checks and checkers; block-houses to protect the squaddies; all of which were potential targets for escalating The Troubles. Europe (as the Common Market) was for sure part of the solution, but it was an agreement brokered after years of negotiations by people of good faith who were prepared to compromise; who were able to recognise the opposition; who weren't rigid over red line issues; who could take an overall, holistic view of a complex problem and come up with a least-worst document that all parties could sign up to.

Part of that process was the recognition by the British establishment that they couldn't continue to ignore Irish Republicanism. From 1988-1994, a long list of proscribed organisations associated with the troubles, were forbidden to be heard speaking on British media. You could read the words in the newspaper, but the words of The Other were invested with such demonic power that the BBC [et al.] couldn't broadcast, say, Gerry Adams talking. Farcically, it was okay to have a voice-actor lip-synch Uncle Gerry's speeches. It was an attempt, albeit inept, to prevent Sinn Féin and the IRA from getting their message out in the public domain; providing an alternative rhetoric from the Unionism of the United Kingdom. So the IRA communicated their message in a different >!booom!< language - making it increasingly expensive for the British economy to persist in ignoring the elephant [LoxodontIRA hibernensis] in room. The biggest bang went up in Central Manchester on this day 15th June 1996 - exactly 23 years ago. 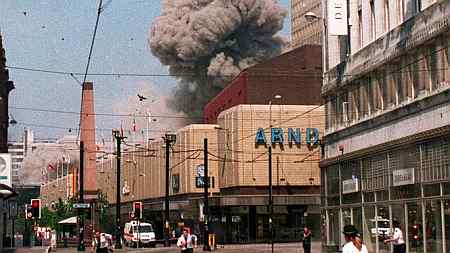 That morning, an IRA active service unit loaded 3 tonnes of ammonium nitrate, some Semtex, a timer and percussion fuses into a large van in London. They drove up the motorway into central Manchester and parked on a double yellow line at 0920hrs, set the timer, put on the hazard lights and walked round the corner to the getaway car. Three minutes later they got a parking ticket. At 0940, a call was put through to the local TV station to give a 1 hour warning. With commendable efficiency, the security forces evacuated 75,000 people from the immediate area and at 1120 the van went up with a bang, taking a lot of glass out and doing nearly £1bn worth of insurable damage to the area. Nobody died but 200 were injured as the debris rained down on people standing outside the police cordon.

The British police and internal security knew within a short while who had carried out the attack but it was felt that arresting the perps and attempting a prosecution would not help bring the troubles to an end. It is not clear who made this realpolitikal decision but it rankled within another unelected constituency The Fourth Estate, in the person of Steve Panter, chief crime reporter at the Manchester Evening News. He ferretted around among his contacts on both sides of the fuzzy boundary between black and white hats and in April 1999, three years later, released the name of the chief suspect on the M.E.N. front page. He came within an ace of being banged up in chokey for not shopping his sources for this information.  Omerta about revealing your sources is put out by journalists as a key point of their ethical position and some of them are prepared to go to jail for the principle. You can read his version of the story in this Twenty Years On retrospective.  But the judge put his finger on the arithmetic of these principles. “Would that extend to permitting a wholly innocent man to face the risk of conviction and sentence?”. In the judge's view, it's not just the journalist who is in the scales of justice when the high moral ground is occupied.
Posted by BobTheScientist at 13:06