Q. What's worse than biting into an apple and seeing a maggot?
A. Biting into an apple and seeing half a maggot!
And face it, neither is as bad as having electrodes applied to your testicles. I think we are a good deal too fussy when it comes to rejecting food. While I still have a functioning immune system, I'm going to get as much as possible out of the food we buy or grow. Throwing a mouldy orange in the compost bin betrays a cock-up on the catering front. But I guess when the choice is buying No apples or Six apples (and a dinky polystyrene tray) then over-catering is not entirely the fault of the consumer. tbh, I wouldn't eat a lot of fruit and I have never consumed a smoothie [because I have (most of) my own teeth] so I suspect that the appearance of oranges and apples is part of a plan to get me to eat nearly 5-a-day.  Can't I just eat caldo verde five times a day? I made a big pot of this Portuguese ambrosia when spring cabbage was on 49c special last week and ate it four days running. My microbiome delivered a huge thumbs up and I felt mighty.

Mais revenons nous a nos pommes. What do you do with a bruised apple? If I'm at home I'll probably cut out the squidgy portion and eat the rest but if the bruise is sustained between home and work, I might just eat the whole thing shkin-and-all. Fresh bruise is less likely to be furry. And if you can't actually see the fungal mycelia, it's reasonable to assume what there will be too little to count. Microbiologists will look shocked at this and talk about aflatoxin and or mycotoxins but to a hammer everything looks like a nail and I think the odds are in my favour that I'll more like sustain injury in my car (slamming digit in the door is not unknown) than that I'll get sick from what I eat. My long term personal experience of eating re-heated rice is set against the occasional horrow story from the path lab.

I use that experience and common sense: salami and cheese routinely acquire a white schimmel and I've decided that it's delusional to scrape off the white stuff when there will be at least as much left invisible just below the scraped surface. I wouldn't treat mouldy chicken or hamburger in the same way - it just doesn't seem right. And chicken doesn't last long in the fridge: chicken soup is always a welcome change from caldo verde. 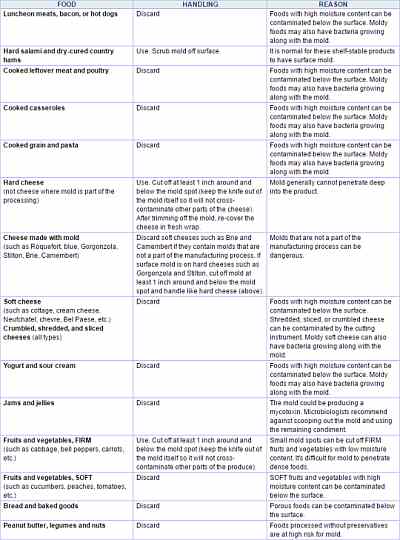 Dau.I sent us this diagram from an unattributed but seemingly authoritative source which leaned heavily on discard for pretty much every sort of fungal contamination. A key factor seems to be moisture content: hardy fungu that can make a living under dry harsh conditions are more likely to be 'good'. There is no way I'm going to 'discard' a whole pot of jam because it's got a little white orbblue cushion on the top surface. If I'm feeling twitchy, I have been know to boil the old pot up (having flicked out the manifest colony) and then start ploughing through it. Likewise, if I'm home alone, I'm more likely to put mouldy soft fruit in the saucepan than in the compost bin. I must admit that I am a little bemused / concerned about mayonaisse - how does that stuff remain good-to-go weeks after opening.
Posted by BobTheScientist at 07:38