I was having a [mindful] walk with The Beloved talking inter alia about Roundup and Monsanto. I was brought up sharpish, and quite correctly, for using the word 'weeds' as something that glyphosate / Roundup kills so effectively. After all a weed is just a plant in the wrong place and time. Poppies are undesirable in a field of corn because a) the remind us of Flanders Fields b) they hoover up some of the fertiliser that the farmer has bought and distributed across the field at considerable expense. But I'm planning on harvesting a bagful of poppy-seed from rough road-side verge site on the back-road to work . . . just as soon as the flowers die back and set seed.

It's like that with invasive species. Life is so diverse and has so many ways of making a living that there is nothing, however fearsome or toxic, that will grow so abundantly that it will take over the planet or even a small part of it. With time, some other species will evolve to eat that mother up. The ingenuity of evolution is limitless; the limiting factor is time. The trouble is that humanity has created systems which allow instant transposition of things, including all variety of living things, to completely new habitat where there can be a passing disruption of the normal checks and balances. Bring a Plasmodium bearing Anopheles mosquito from Brazzaville to Paris in an Air France Airbus and you can get a few cases of malaria near Paris-CDG but it does not start an Ebola-like health freak-out. 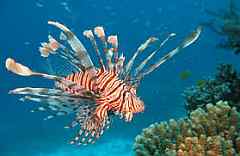 I wrote a while ago about a "thick as pig-dribble" American aquarium owner who released a gravid female lionfish Pterois volitans into the ocean off Florida in the 1980s. Her offspring have now spread from Cartagena to the Carolinas eating everything slower than them as the go. Several native fish-species are now on the edge of the abyss because of this new kid on the block. Not very effect solutions have included have spear-fishing competitions and trying to create a market for lion-fish fillets. Beauty is in the eye of the beholder but you have to grant that lionfish [L] are spectacular: the black and white stripes are a text-book case of aposematic colouring: I R poisonous; don't bother chomping; you'll regret it. And that's part of the problem - apart from the appetite - swimmers don't want to have a painful [rarely fatal] jolt of toxin from a brush with a stately passing lionfish.

Now you can't keep a good geek in his box and a group of them working at RSE have invented a hunter-killer submersible robot for hoovering up lionfish like it was an arcade game. It's like a drone with little directional propellors attached to a transparent plastic cylinder for storing the catch. The two metal arms point forward from the 'bot are bug-blatter shock electrodes which stun the fish so that they can be scooped up. Movie-time!! 'nother. The next step is surely to hire a pattern-recognition expert from Google and then the system will be totally autonomous. The disadvantage (for the lionfish) is that there can be no mistaking them, in the Caribbean, for an innocent bystander. And the next-next step is to start a mail-order business shipping dew-picked omega-rich free-range gluten-free lactose-free max-airmiles organic lionfish fillets to millennials who are willing to pay $39.99/kg + P&P.