One of the themes which threads The Blob together is that, in science as everywhere else, women have to work twice as hard to get half as far as their twin brothers. For Science week last month, my first draft of an Eponymous Alphabet was so  thin on female scientists as to make them barely visible. That is a reflection of historical certainties that science was an exclusive straight white patriarchy during those times when things were discovered and given names. But also a reflection that I am part of that same patriarchy and only see scientists who have silvery whiskers about their chops. I was brought up all standing and sent back to the drawing-board to make a second draft by those who were younger fitter and XXier. That was decisively more female and more European . . . and a good thing too. As the project manager, I was left, at short notice, with a number of gaps to fill. But early on in the process, I had owned V is for Virus to give credit to Yvonne Barr, a then young Irish post-Graduate student who, with her boss Michael Epstein, isolated Epstein-Barr Virus EBV aka human herpesvirus 4 (HHV-4) in 1963. I've given her a hat-tip in my piece on Denis "Lymphoma" Burkitt. Here's her 50 year retrospective on the discovery. [Forensic videologists will note <green-screen alert> that the "waves" in the background never reach shore]. In researching my snippet on Barr, I found [Wikipedia] that she was born in Ireland in the 1930s: 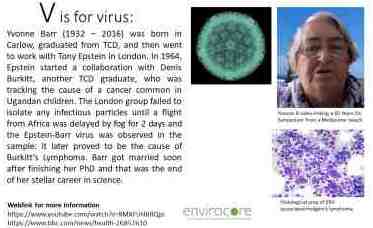 Curiosity drove me forward to see if I could discover where in Ireland this doggedly persistent good pair of hands had been born. Accordingly, I went to ancestry.com, and discovered that she was born in Laois/Carlow on 11th March 1932 and that her mother's name was Norris. I'm not going to make a habit of this sort of thing, so I was unwilling to take out a sub to Ancestry.com's full archival database. I was, however, able to justify €4 to get a 'research only' copy of the entry in the Register of Births. Last Monday, I went to the other side of town, coughed up my €4 and got: 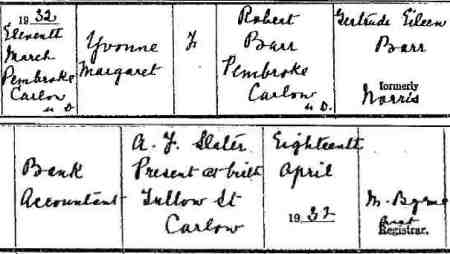 From which I deduce that Yvonne Margaret Barr [F] was born in Pembroke, Carlow Urban District; at home because her father Robert Barr lived at the same address. Her mother Gertrude Eileen's unmarried name was Norris and the birth was reported by AF Slater, present at birth, Tullow St Carlow. I'm guessing he was the local doctor but it's just possible it was the local midwife. Pembroke is just off Burrin Street and about 1km from my office. Tullow Street is a short walk in the opposite direction. I was quite delilah to make this discovery, it was almost as exciting as discovering a new human gene, and I got closure on this project a lot quicker. And I've solved a small dilemma for The Institute's Suits: the new Science Building should surely be named the Yvonne Barr Memorial.