Felis catus the domestic cat is handy for keeping down mice and less desirable for killing song birds but these are value judgements that we humans lay on the poor creatures according to how useful they are to us. An interesting and valuable project is being launched today here in Ireland that is based on the fact that cats come in a palette of colours and that those colours are largely determined by variants inherited in a 'simple Mendelian fashion".  The last phrase of jargon means that the genetics of cat coat colour is well understood and that you can tell which gene-variants a given cat carries merely by looking . . . with binoculars if necessary or even by microscopic analysis of a photograph that appeared on the front cover of Journal of Heredity. Almost all other species would require a blood- or DNA-sample to generate any genetic information. 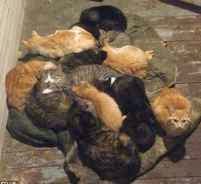 This project is a good example of where a number of observations can be combined to yield some data. Q: "What is the singular of data?" A: "Anecdote".  You can't tell much by determining the genetic make-up of the cat next door; except to hazard a well-informed guess as to which of the neighbourhood cats were its parents.  But if you look at many cats, you can calculate what the frequency of the genes are in that population. This was first done in a scientific fashion by a student of J.B.S Haldane in 1947: A.G. 'Tony" Searle was tasked by the great man to sample the cats of blitz-damaged London as part of his PhD programme.  It turned out that there were a lot of stray cats on  bomb-sites and in SPCA shelters and, in short order, Searle had data on 700 cats.  That sounds like data but on another level it is also an anecdote.  It is just one dot on the globe with rather a lot of numbers attached to it.  A few years later, however, Searle was posted to Singapore and he dusted off his cat genetics tool-kit and found several hundred cats in the streets and bazaars of that outpost of empire . . .

. . . and they were completely different from the cats of London. Not in the sense that they had extra legs or googly eyes but their gene frequencies were different. In post-WWII London, for example, Siamese cats were exotic and rare but in Singapore they were common as muck. Well, that's interesting: any scientist would start to ask questions:
Such questions spawned a cottage industry that covered large portions of the globe in the 1970s and 1980s.  In my callow youth, I was part of that project and it got me an education, lifelong friends and loadsa data.  The data that came in were idiosyncratically patchy: New England, Brazil, Scotland and the Netherlands were exhaustively covered but Africa and Spanish South America were blank.  It all depended on who was prepared to make a run for it in a particular region.

Aoife McLysaght, in conjunction with the Irish Times, is taking up the baton today to bring the field of cat population genetics into the crowd-sourced 21st century. By making it easy for Sean O'Public to contribute a genetic diagnosis of the family cat, they hope to get a mountain of data from across the country and see whether the 40 year old findings in Donegal have held up to the buffets of evolution.  Here's the lead article in the Irish Times which includes an embedded link to a simple web-form that will enable you, or your class at school, or your scout-troop to contribute. One of the questions will allow them to tie your data to a particular county.  This follows an honorable tradition in the footsteps of George Dawson Ireland's first Professor of Genetics who surveyed the country's human inhabitants w.r.t. their ABO blood groups back in the 1950s.  He went to the Blood Transfusion Board and lifted data for something in excess of 150,000 people (1:18 of the whole population) and calculated the frequencies for each county.  Like Searle with his cats, Dawson was gratified to find that there were slight but statistically significant differences in ABO frequencies in the West of the country compared to Dublin.

And what about Ukraine?  A parallel project would mobilise a lot of youngsters into doing some real science.