Safety in the workspace

You can only die once but you can do damage to yourself so many times: ah the pain, the pain; I wish I hadn't done that. Sawing through my thumb as well as a 10cm Wavin pipe. Immersing myself in a vat of paint-stripper. Immersing my arm in a vat of pirhanas. Standing in the way of a txtn car driver. Splashing radioactive phosphorus in my eye. The feedback on these actions was more or less immediate - at least I knew I'd done something foolish at the time. Because the hazards were known knowns. Back in the day we used to pipette-by-mouth = suck up a precise amount of liquid into calibrated tube and run it into glass beaker: urine, phenol, microbial cultures . . . And I don't think that safety-glasses were A Thing in the 1970s. I spend much of my time in the lab at work now reminding students to put their safety-glasses, like, in front of their eyes. 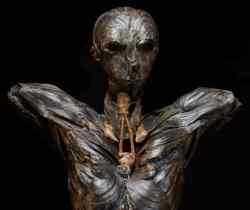 I came through my road-traffic accident damaged but unbowed, although my bike didn't. The phosphorus in the eye maybe not so much: I'm still expecting a tumor 30 years later, although I can't even remember which eye took the hit. Which brings me to Canadian artist Gillian Genser who didn't want to handle any of those narsty man-made artifical things; she only dealt in natural products like mussel Mytilis edulis shells from which she crafted eerie amazing sculptures [R her Adam's muscles are made of mussels, geddit]. It took weeks and weeks of work and after some time on the project she started to feel ill: puka-puka, headaches, cramps. In Canada, a civilised country, if you fall sick then you get referred to [a succession of] medical specialists without having to sell your house. "When they asked me if I worked with anything toxic, I said no, that I only used natural materials". 15 years after adverse symptoms first started, she twigged (seemingly without much help from the medical consultants) that she had been inhaling mussel dust that was loaded with arsenic and cadmium because the invertebrates were grown in the South China Sea bathed in the industrial outfall from dozens of unregulated paint and plastic factories. That's what mussels Mytilis edulis and oysters Ostrea edulis do: they filter hundreds of litres of water a day accumulating minute frags of food and minute quantities of coliforms and heavy metals. Note the specific name for those shellfish edulis = edible. But maybe nowadays not so much. Irish water is still discharging raw sewage into Waterford Harbour right across the river from Woodstown oyster farm. Genser is still alive after 15 years of occupational toxicity but her QALYs are terrrrible.

I picked up this story from MeFi where, as ever, the commentary is at least as interesting and informative as the original story.