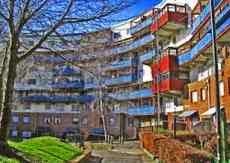 When we lived in #37 on a street in Newcastle Upon Tyne in the 80s, the chap across the road in #36 became a good friend. Roy worked in Tyne Tees Televison, the local commercial broadcasting station in the days when there was no local radio and only a handful of TV channels.  He'd never been to university - romantically leaving school to live up a green lane in Devon and work as a dairy-man. His original gig at TTTV was as a researcher and producer on farrrming programmes but he branched out into a lot of other things as well. One day at work, he heard with a sort of jaw-sagging shock that the management was clearing space for some new venture and was going to ditch a few floor-to-ceiling cabinets full of still photographs of the Geordie streetscape of the 1950s and 1960s.  Of particular interest were boxes containing an archive of the the mean streets of Byker before they were demolished in the early 1970s and replaced by the Byker Wall [L looking well in the sun] a modernist block of social housing to replace a clatter of Victorian red-brick row houses (aka slums). I know Roy spent some frantic hours on the telephone (on company time) trying to find a home for this irreplaceable archive of where we had come from, but I don't think he was successful: his own Victorian terraced was modestly full with beds, chairs, tables and a wife and two children.

The BBC had also dropped the ball on a lot of their broadcast material. Someone had to decide what to keep apart from broadcasts of Coronations because there was finite space in Broadcasting House. There was finite space in the Library on the TCD campus back in the 1970s so the University built an archive for all the little-used material out towards the Airport in Santry but, for whatever reasons, that didn't happen soon enough or big enough for the BBC and a lot of ephemeral material was taped over or discarded. There was nothing more ephemeral, nor so rich in its sense of time and place as Alistair Cooke's Letter from America, which went out once a week with whatever was uppermost in Mr Cooke's mind when he wrote his script. It could be the end of the Vietnam War or an inconsequential piece about lox and bagels.  It was like a blog before the interweb and it continued every week for sixty YEARS. Like Stephen Jay Gould's column in Natural History, in which he delivered 3000 words every month for 25 years.  Gould, who was a busy professor and researcher in his day job, could only afford to do the Natural History gig if he allocated a single sitting and wrote without edits.  It's a bit like Woodrow Wilson's:
“That depends on the length of the speech,” answered the President. “If it is a ten-minute speech it takes me all of two weeks to prepare it; if it is a half-hour speech it takes me a week; if I can talk as long as I want to it requires no preparation at all. I am ready now.”
You can see that Cooke hand-editted his typescripts which amounted to about 7000 words a month. But it was only a master like Cooke who could start some intriguing hare rollicking off through connected hill and counter-intuitive dale and always, always rein the story back to reflect on the starting point.  You can listen yourself and see if you agree.

ANNyway, by the time the BBC realised that they had an irreplaceably rich and diverse vertical slice through the second half of the 20th Century they'd lost or erased much of the archive of  2500+ recordings of Letter From America. Being a broadcaster, in 2012 the Beeb put out a calling-all-cars request to see if anyone had recorded and retained some long ago episodes at home. Bingo! Two chaps looked in attic and shed and between them found tapes of some 600 episodes from 30-40 years previously which increased the archive by about 65%. After these whiffly, crackly and whooshy recordings had been de-scratched by BBC sound engineers - surely the best project any headphone boffin could imagine - they were editted for re-broadcasting. In March of this year, one of the old buffers found another 50 episodes wrapped up in an old fertiliser-spreader in his barn.  You can see why we only have 5% of the plays of Sophocles.

To put this in context, I have religiously written a post on every one of the last 500 days at about 20,000 words a month. But as with Oscar Wilde's "B'god Whistler, I wish I'd said that", when I listen back to Alistair Cooke, I can only wish that I had his felicity of phrase or breadth of interest . . . and a contract with the BBC.
Posted by BobTheScientist at 05:56