When I was over in England last week visiting my mother, I recalled an earlier visit in which I'd taken a bus from London to the nearest town with a bus-station. With a grandstand view maybe 3m above the roadway, I could see over the hedges at the countryside - it's much better than the view you get while sardined up in a private automobile. Crossing Salisbury Plain near Stonehenge the landscape appeared as thick with tumuli as a bun is full of currants.  There has been a lot of activity in the area over a lot of time.  A few years ago, a retired marketing executive called Tom Brooks got out some maps and started to draw lines between Ancient Monuments recognised by the Ordnance Survey.  He found that a disconcerting number of them appeared to form equilateral and isosceles triangles!  His work was published in the Daily Mail [no not peer-reviewed by fellow marketeers] and annoyed a mathematician called Matt Parker. 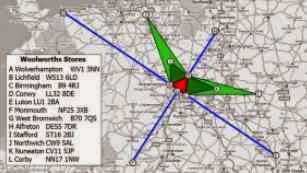 Not annoyed in a "Harrrumph all nonsense" way but in a "I wonder if I can replicate this" way. In other words, Parker is a trained scientist and skeptic: he also has a presence on thne Numberphile channel on YouTube. He found a map which identified the sites of all the Woolworth stores [a high street multiple that went bust in 2008] and started to find triangles . . . lots of them, cascades of them.  And by extrapolating the baseline of some central equilaterals he revealed ley-lines of what he ironically called the ancient hunter-gatherer civilisation of Woolworth.  His analysis was picked up by Ben Goldacre, BadArcheology and SciScoop, and other people who crusade to protect us from pseudo-science.  The point Parker was making was that if you have a helluva lot of points (800 in the case of Woolies) you can find any pattern you want somewhere in the data, and triangles are shoo-in because you only need three points reasonably aligned: it's easier to find hits if you allow 2% tolerance than if you insist on accuracy down to the 5th GPS-significant figure.

About the time I went to Paris on my own as a teenager, there was a flurry of Letters To The Times about amazing coincidences.  These annoyed me in the same way that Parker was annoyed by the Ancient Monument map in the Daily Mail.  I did an analysis similar to that by which Frank Drake guesstimated the likelihood of there being intelligent life Out There in Space.  One of the astounding coincidences hinged on the writer deciding, several years previously, to visit a small English church and was amazed to encounter one of his old high school teachers coming out as he was going in.  I reasoned that the coincidence would be no less amazing if he'd met a different one of this teachers, or anyone from his class, or anyone with whom he'd done his National Service, or any of his cousins, his work-mates, his butcher or his car-mechanic . . . or maybe 500 other friends & relations & acquaintances. The population of the UK back then was about 50 million, so it's a chance of 1:100,000 of making an encounter at that place and that time.  As it would have been no less extraordinary if they'd met each other in the Church rather than just outside or indeed in the car park, there was quite a bit of tolerance in space-time as well.  By dividing the UK into 100m x 100m squares (that's a hectare to the EU) and dividing Coincidence-Writer's life into 10 minute segments and having him and his 500 acquaintances doing a random walk around the country, I was able to show that in a 20 year span, a coincidental encounter was more likely than not.  The Times was not interested in publishing this careful Fermi type analysis.  That's either because the editor was benighted in his Arts Block education or that I'd made some fatuous error in my calculations.

You can see a 1 hour talk given to high-school math-wonks and their teachers by Matt Parker courtesy of the London Mathematical Society LMS in which he explains the math behind the Woolworth story and a few other examples debunking coincidences and patterns as less amazing than seem at first sight, including the Disneyland famous-for-fifteen-minutes story of Alex and Donna who had been unknowingly photographed real close to each other 30 years before they got married.
Posted by BobTheScientist at 07:23