Giraffe's are, like, tall and their neonatal babies are impossibly, lolloppingly cute. As I tried to explain a tuthree years ago, several different species of giraffe are now recognised from a quantitative study of their DNA. So the answer to the question "How many species of giraffe are there, then?" is more than one, less than eight, probably four. I am sorry to report that my machinations to air in Ireland a film about Giraffista Mary Innis Dagg have come to naught - having run into the sand of disinterest even before Coronarama. 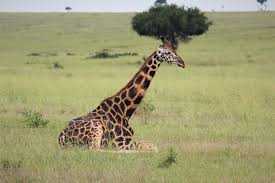 There is no harm, though to revisit Giraffe's in the wild; and I have included a picture [L] to show what sort of hat the fashion-conscious giraffe will be wearing at the Serengeti Races in the Fall. Those of you who read my report about the holocaust of reindeer caused by a lightning strike, may have wondered why giraffes have the two little knobby horns on top of their heads. Well, no, I doubt if any normal person could have achieved a segue from Norway to Kenya when considering the lightning-susceptibility of two distantly related artiodactyls. Anyway Gizmodo is reporting a pretty clear anecdote about the death of two adjacent giraffes during a thunderstorm in South Africa. One corpse had a bloody contusion at the base of her horn and the other, apparently uninjured but defo not responsive must have take a "side-splash" or "ground current" from her nearby, slightly taller, pal. Tutorial on the language of fatal lightning strikes. The jury is still out on whether giraffes take more lightning strikes than shorter large mammals: two deaths don't maker a dataset! You'll probably be wondering if there are any behavioural adaptations in giraffes which might mitigate the risk of becoming a statistic during storms. Do they duck-and-cover or gallop towards the nearest acacia tree?