One of my new pals over at Metafilter cited a few songs by Grace Petrie from Leicester. I listened to one and I was hooked and then another and I wrote an indignant email to my grown-up children:
"Fakkin' bri'nt. If you knew about her before, why did nobody tell me?" Dadical
She seems to be having a lorra fun as well as being genuinely angry. But who said that we had to march to the barricades with heart a-glum? 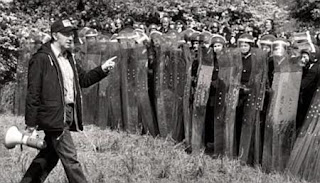 A few weeks ago I downloaded a Mastertapes interview with Billy Bragg. There he humbly acknowledges being wrong footed when he travelled North to help the Miner's with their protest and found that working class people in Durham a) had been down a few mines b) could do protest songs of their own. He's my age and became the most articulate of the anti-Thatcherites who could carry a tune. I've mentioned him recently. And he can sing the Internationale! [after all he wrote it].
About a decade ago Billy Bragg dragged Grace Petrie along to Glastonbury and she's been a feature there ever since, I was never at Glastonbury, although my Greek revolutionary room-mate met her husband climbing over a fence to get in for free. And until this evening, I'd never heard of Grace Petrie. Most of the art movements Impressionism, Fauvism, Cubism took their names from contemptuous criticism by The Establishment of the time. Here's from the programme notes from a Petrie concert.
'A powerful new songwriting voice' The Guardian
'Whining folk singer' The Telegraph
Well the Reactograph would say that wouldn't He? 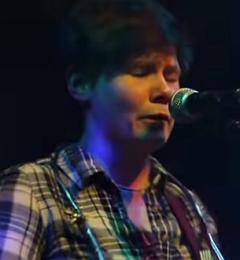 Grace isn't particularly grateful for the trib. And while it is clear that Billy Bragg influenced her when she was growing up, she's going her own way because the 1980s are history and we all have to move on from those uncosy and indignant certainties. She quite clear, for example, that the Lefties of my generation, with the privatised housing stock and comfortable government pensions have robbed her generation of any hope of owning their own gaff OR securing any roof for a reasonable rent.