Clocking off the days

I lost my second best reading glasses a couple of weeks ago. One minute they were there and then >!poof!< gone. I may have eaten them. My mother wasn't having any of that, she wore her idle spectacles on her capacious bosom; keeping them about her person by a lanyard round her neck. There they acted as a handy backstop for particles of falling food. The evenings are getting chillier and The Beloved and I have been known to eat dinner in the living room because the wood-burning stove stops the hands getting frost-bitten. She made rice and chili beans the other night and, twixt fork and lip something hot and damp fell down me shirt-front. I fossicked around down there; came up with a grain of rice and assumed I'd tidied myself up sufficient unto the day. When I stood up to leave the room, however, a kidney bean fell from my person and skittered across the floor.  Imagine the mortification if we'd had company! Skittering? for the last several years I've been unabashed at playing the "I R old" card when blind-sided by a food accident.

I returned to work on the 1st of September. I'm retiring on Friday 2nd October because the government is sticking by its promise to give public servants a 2% pay-hike. When Henri de Navarre converted to Catholicism to secure the throne of France he is reputed to have said "Paris vaut une messe: [Paris is worth a mass]. One of my colleagues did some calculations and decided to work the month of September because the students, and actual work-work, wouldn't start until 21st September: Sure why wouldn't I give a few lectures for an extra €700 a year on my pension?. Why not indeed! He is clearly just marking time until  02 Oct 20. Me too, I guess. So I sent him this excel spread-sheet so that he could, like a lifer expecting a favorable encounter with the Parole Board, cross off the days. 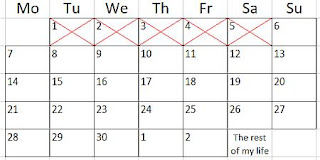 Let me emphasise that my pension is in a much less solid state. That 2% increment is worth to me rather less that a dollar a day. Looking at my time-table, I only count 10 hours of actual face-time which I'll have to give between 21st Sept and 2nd Oct. I'm happy to work for €30/hr: not being a lawyer, I don't have an exaggerated sense of my billable-hour worth.
Posted by BobTheScientist at 07:19