Last year, as this year, I mentored a couple of students in the MSc in Pharmeceutical Regulatory Affairs  aka PharmRegs. I was unable to shake one of last year's crop loose and we are still in contact as I watch his pilgrim's progress through the hostile environment of post Twenty-Seventh Amendment of the Constitution which limited the rights to citizenship-by-birth in Ireland. It's not super-hostile in a BLM manner but it's always harder in Ireland for those who have the best tan. Anyway DrV has been working in a Community Pharmacy in South suburban Dublin since the beginning of lockdown. It's been a logistical nightmare because he's been unwilling to let go the bed in the house he shares with a couple of Indian pals in Graigcullen Co.Boondocks. Digs near his work and then a long ragged journey on public transport when he had a few days off work for normal human relations with normal human beings . . . and plenty of dhal. 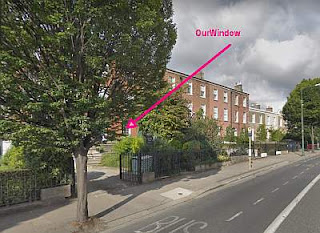 He sent me a text last week to say that he'd landed a new gaff in Upper XX Leeson Street at the ropier end of salubrious Dublin 4 - where all the embassies are. Nice for him but a vortex to me because, for about 8 months in 1977-1978, we lived in the same house! Not the whole house, mind for either party. DrV has brought the mountain to his Mohammed by persuading his two pals from Tamil Nadu to give up the ould country house and shift gear into the turmoil of the city. They have a whole floor, two double bedrooms kitch bath liv etc.

In 1977 we inherited a single room 4.5 x 5.0 m with a big Georgian window looking out over the street. I say 'inherited' because these flats and bedsits were valuable assets and you'd be sure to let your network know if you were off the Philadelphia or Dortmund to earn a crust. Bedsits are now illegal in Ireland because the are though to constitute an affront to human dignity and the Rights of Man. But I lived a succession of these private spaces when I was a student and was as happy there as I am now with our mighty farrrm of land where you can't hear, let alone smell the neighbours. We, at that time, were Herself, myself and The Boy, who turned 2 in that room. It was a bit cramped but sure beat a Citroen Dyane which we'd called home for the whole of Summer 1977. 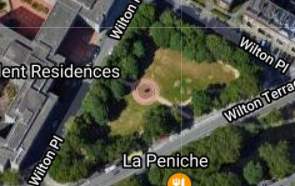 We still had the car when we lived in Leeson Street and would beetle off to New Ross some weekends to visit The Beloved's family. I'd be sure to bring home a trunk full of fire-wood to send up the chimney of the open fire-place with which the room was heated. In those days you'd be much more likely to throw on a gansey than throw the switch on the central heating. I'd also slope off along the adjacent Grand Canal after dark and scavenge fallen branches for 'sticks' and kindling. A little triangle of park at Wilton Place had particularly rich pickings. Years later the headquarters of Science Foundation Ireland looked out over that park, little appreciating how hard it was to keep scientists warm in Ireland before SFI started to lurry cash into the enterprise.

As well as free sticks, I also cruised about looking for bits of timber. It was probably there that I made an exceedingly uncomfortable arm-chair from a tea-chest. And definitely there that I built a timber platform bed in one corner of our home. The slightly louche brother of a friend presented us with a 2.4 x 1.2 m sheet of laminated MDF for the lid of the platform. It was super-smooth and washable in stark contrast to the other parts of the structure: I had a saw and a hammer but no plane. Underneath, I made a micro-bed for The Boy and a desk for writing. We definitely didn't advertise these structural changes when the landlord came to collect the rent on Fridays. But I still think we improved the utility of the space. The Beloved's sister didn't object when we set off for Foreign in June 1978 and she inherited the gaff on Leeson Street.