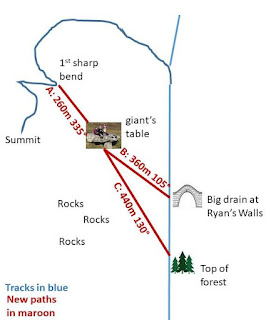 We're back on the hill, The Beloved and me, making progress for progressive farming in Ireland's uplands. Last week we did a couple of days preparing a square of over-grown heather for controlled burning. Actually it was more preparing the periphery to make it less likely that the heather blazing would take off across the hillside à la California. Clearing a fire-break by hand is heart-break hard. A strimmer, or better a hedge-clipper, is The Biz with a team of rakers and gleaners coming along after each noise-maker.
As the Surveyor General, I was asked to  see if it was feasible to clear the thatch off a path across the hillside to The Giant's Table, our medium sized dolmen; and super modest tourist attraction. I went for a walk to the Cross last Saturday night and came down via the Summit and the Giant's Table. Along the way, I met two of my neighbours in a tractor. One of them suggested strimming a path to the Giant's Table from the North. If you follow the turf track round the back of the hill, it zig-zags up to the summit. At the 1st sharp bend this rutted path is pointing more or less straight at the G's Table. That strikes me as an excellent idea because, having approached the Giant's Table from the South, most people will be heading onwards and upwards.
I've called this Route A. There are two reasonable paths from the South to the Giant's Table. One veering off the "main road" at the top of the forest. It's 440m [on a gradient of 1 in 3.6] from there to the Table, fairly clear of rocks and reasonably dry underfoot. On the map [R] I've called this Route C.  I prefer a shorter 360m, slightly steeper [1 in 3] route (less work strimming) starting further along the track at the Big Drain under the roadway opposite Ryan's Walls across the Wexford border. This is Route B.
Having worked out what equipment was required, it took 2 hours to clear 2 sides = 140m of the burning square. Route A+B could take between 4x and 5x as many person-hours. You don't need to be very fussy: the expectation is that encouraging walkers along a make-it-easier path will be sufficient to keep the way clear.
For surveying the route, it's much easier if two people are involved: one to do the angles and one to plant ["left left right-a-bit, left, that's spot on"] the distant flags. Could be done the same day as the strimming and raking. Again that does have to be obsessively accurate: if the line is, say, 3° adrift if will only be sin(3°) off or 5% at the far end . . . say 20m over half a kilometer.
Posted by BobTheScientist at 07:30