They will in a minute 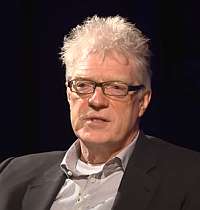 Ken Robinson [L] grew up in the shadow of the Everton FA stadium at Goodison Park, Liverpool. His family were neither rich nor famous. As a nipper, he was fast and agile, ran circles round his mates when the played soccer in the street and wanted nothing more than to do a trial for Everton. That dream was kiboshed in 1954 when, at the age of 4, he contracted polio and spent months in hospital.  He recovered but that was the end of his career as a soccer star. He became another sort of star 50 years later when he was invited to give an early TED talk Do Schools Kill Creativity? Which rhetorical device he proceeded to answer in the affirmative over the next 20 minutes. For a while [and even now for all I know] it was the Most Watched TED Talk and even on youtube it has clocked up 19 million hits. Which is big enough to attract push-back because no 17 minute unscripted deconstruction of the biases and failures of trad education cannot be that good.

But a lot of the critics are too woolly in their thinking to be able to distinguish between the medium [TED - glib soundbytes to edutain rich media knobs and allow them to believe that they are clever too] from the message [that something is rotten in the state of nEdmark] . . . and finish up shooting at the messenger. at the messenger, mark, because, whatever about his legs, Ken's mind was definitely agile. I'm sure that a lot of the self-deprecating remarks and discursive anecdotes bubbled up in his mind as the talk progressed and he played the audience like the best of stand-ups. Check out his They will in a minute joke - pure gold.

The kernel of Robinson's criticism of regular school education is that it privileges some skills / aptitudes / abilities and certain certainties - primarily literacy and numeracy - and sidelines, ignores, deprecates other vital aspects of the human condition - like singing together, -- dancing like nobody's watching -- carpentry -- painting -- whatever you're really good at. Not me, I was fine, I was institutionalised, biddable, good with math and rote learning and reasonably curious. I did good enough [nothing stellar because my ambition genes were shot off in the war] through an absurdly long and expensive education. I was 29! before I got my first proper job to justify all the certificates and degrees. In parallel Howard Gardner was trying, with his concept of multiple intelligences, to acknowledge a diversity of talents in the young and give encouragement to whatever presents. Gardner has moved on from MI and has other tongs in the fire.

Ken Robinson has moved on too insofar as he died last week, cancer, in London whither he'd returned after 2 decades in California being feted as a TED-talker, consultant and talking head. I passed on the news to Dau.II and her feller, neither of whom went to school or sat their Leaving Certificate. Young Perry couldn't see what the fuss was about with that TED Talk: Robinson was describing, a bit like Attenborough, what was entirely normal in his home [and ours] when he was growing up. of course tots should play guitars and concert flutes and write their own lyrics; of course they should spend hours a week making cup-cakes; of course they'd know far more about moths than maths; of course 4 year olds play with those aged 8; of course they'd think for themselves and have well-polished crap-detectors.

I'm a bit sniffly about the loss of this spokesman for The Other and have been binge-watching the back-catalog:
Ken returns to Liverpool TEDx.
Mrs Lynn, Gillian isn't sick, she's a dancer
Setting a New Normal
His pal Dave unmanned
Missing Paul McCartney's musical ability