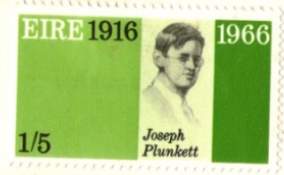 Tonight, across the face of Ireland and the [digital] World, is Culture Night. It's hard to credit that this event is a comparatively recent [2006 start] creation. Then again, it comes as a total surprise to me each year, so I suspect the publicity engine is a bit sputtery. I mean, if they can't catch a known Culture Vulture like me, they must be whooshing past millions of people who will spend the evening watching the footie or getting hammered instead. They are by-passing that mythic creature Gaeilgeoir Teanga Amháin, because they haven't invested in a parallel in Irish web site.  I've suggested that Pat the Salt in Waterford tunes in to Mná na Déise a series of readings from the Women of the County. The plain people of Waterford have some linguistic peculiarities, some of which I've highlighted before.

Meanwhile, in The Republic, I've pointed Dau.II > !vive la francophonie! < at Alliance Française de Cork, where they're having a knees-up. Which will be ironic because much of the programme will be about the Breton language, which the Alliance Patriarchie Française has spent the last 200 years trying to extirpate. I'll leave you to brow the website. The [this is an opportunity not a threat] upside to Covid Culture Night is that you don't have to dither about two possible events happening at the same time buton opposite sides of town.

If you want Culture [in it's widest possible definition, including japes, spelinge errurs, science, farming and unintelligible automatic writing] , you could do worse than use the search box [search image R] at the top left of this page. I was in at my desk at The Institute on Wednesday and printed out the last most recent 100 Blobs . . . while I still have access to a laser printer, like. Almost exactly years ago, I did some obsessive nonsense to ensure that the millionth word written on The Blob was zeugma. I neither know nor care when [with help I am getting better] I passed 2 million Blob words, but sometime over the Summer than milestone whooshed past. I'll have something to read when I drift off into retirement in 15 days, including this one, time.