A right pain in the tits

«La cause des animaux passe avant le souci de me ridiculiser
il est indissolublement lié au destin des hommes»
The fate of animals is of greater importance to me than the fear of
appearing ridiculous;  it is indissolubly connected with the fate of men.


Emile Zola
b. today 1840
"A right pain in the tits" sounds dire but is actually equivalent to "a mild annoyance" in my-speak. You may wonder at this obsession with moobs - just a couple of weeks ago I quoted a joke which hinged on I left tit in the tool-box. But joking aside, it turns out that men and women don't process, and so don't experience, pain in the same way. Which is worrying if almost all pain-killers are tested for efficacy and safety in [expendable] young men.
Mais revenons nous a nos souffrances. There is a really interesting piece in this week's Nature: Why the sexes don’t feel pain the same way. It's passing interesting in featuring several really weird things that science feels comfortable doing, and can secure ethical approval for, to mice. In the mid 1990s I sat through the longest [100min] job-seminar I ever endured. It was about the inflammatory response which could only be studied scientifically by inducing pain in mice; and then seeinghow you could reduce the symptoms. As I remember it, this involved putting the tails of mice in painful clamps and taking blood samples from the other end. Yer Man got the job over rival candidates who offered shorter talks. He was really supportive of me after joining the faculty and it is possible that, without that support, I'd now be selling brushes door-to-door rather than selling science to eager young minds. 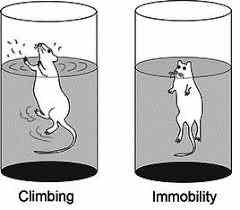 15 Years later, we co-supervised a final-year project student with a chap in the Psych Department. His experimental mice - I think he was interested in depression - were dumped in basin of water to swim until they gave up [which was and is the standard practice].  Depressed mice give up (and would drown if they weren't fished out and wrung dry by the lab technician) earlier than better adjusted mice. Who thought up those standards?
Posted by BobTheScientist at 07:06