In the Stacks of Serendip

Eeee, but I do like a bit of random. It can be a welcome antidote to The Illusion of Control - the idea that being in charge of our destiny is A Good Thing. Random is Good. With 100s of 1,000s of new books published in English each year we cannot possibly read them all. If we follow the chitter of the chattering classes and only read the recommendations of Book Reviewers for the weekend papers then a) we are being boring, normative and unadventurous and b) we're probably missing some humdinging good reads. Dau.I the Librarian recently implemented a cunning plan to show-case essentially random books from the shelves. That curated random is probably better than random-random because so many books are so dull and niche that only a dozen people in the country would be able for them. Years ago when I was full-time in TCD with access to its copyright library, I'd often plunge into the shelves where they paused books between being catalogued and being shelved in the minority interest warehouse out near the airport. It was bad day if I couldn't find something to read for the weekend. Here's a bunch of books discarded when a friend moved his traps from TCD to UCD: 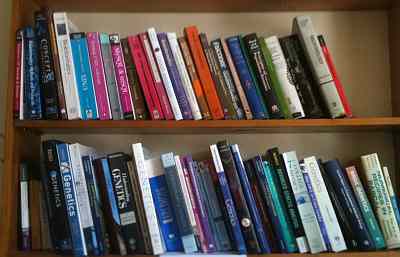 Wooty woot woot! There's a copy of Sokal & Rohlf's Biometry, I said, I'll have that! And I did and I do.
The Library of Congress has the largest collection of books in the world - 25 million items. But quantity is no help if you just want something to read; maybe to help you fall asleep at night. They've launched a kinda useless site called LoCserendipity.com, which randomly lists a bunch of book-titles from its collection. The titles are linked to a catalog entry showing the frontispiece which gives you a teensy bit more information; and in some cases further links to the Full Text. Every time you visit the list changes! So I captured a snap-shot:
You'd have to have a very full social life if you couldn't find something in that kist that seemed clickable. YMMV Your Mileage Will Definitely Vary YMWDV
Posted by BobTheScientist at 07:24