A rattle of pens 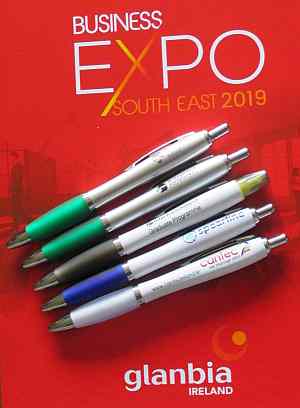 For the last several weeks I have been battered and bread-crumbed with unsolicited e-mails inviting me to attend the 2019 South East Business Expo at The WIT Arena on the edge of Waterford City. Why ever would I want to go to that? you may well ask. In the restless search for copy for The Blob, I'm much more up for the outre than I used to be. You can't be surprised by joy (or the unexpected) if you shuttle between work and sofa without ever varying the pattern. Eventually I caved, and registered for the Expo because a) it was free in b) it promised 'refreshments' c) I knew there would be pens and post-its and key-rings d) it was on Wednesday, when I habitually drive past The Arena on my way to pick up Pat the Salt e) I thought I might make a few contacts for work-experience for my current crop of [nine, 9!] Final Year research project students.

By those criteria, my visit was a roaring success - I gorra loada pens [L for 5 of identical design but different logos and back-ground colours - I have another 7 of different design]. As I worked the room talking to the stand-holders, I'd ask them if their pens worked . . . because obviously it is a terrible advertisement for your company if the goddamned pen ceases to write after 15 minutes and the spring-loaded on-off button breaks before the weekend. Trouble is that a dead pen is just clutter for land-fill whereas a promotional mouse-mat is good for a seat in a Finnish bus shelter. When I left the venue to pick up Pat, my verdict was There are a lot of different ways of earning a living in Ireland. That evening I opened up all the promo pens in case there was a note inside Help, I'm an enslaved refugee in a pen factory somewhere in Ireland.


The first chap I actually talked to, rather than scarfing a pen from, was Greg from Ille who was in the hygiene business. I've written before about coliforms in the bathroom - in particular their distribution by hot-air hand driers. So I gave him a bit of slaggin' about his hand-drying machines. Not so he called me out our boxes dispense paper towels. Which seemed retro but he was claiming that paper towels were The Future, not least because Dyson and other blower-driers would soon be banned for their carbon and coliform footprint. Coincidentally, last Patrick's Weekend, Dau.I was remembering her teen years in the 00s when being green and a planet-hugger was all about not wasting paper and being organic. Air-miles and carbon weren't yet over the horizon ten years ago. One reason why Ille towel dispensers look like blowers is that they are loaded with electronics: when you wave your wet hand in front of one, it dispenses precisely one paper towel researched so that it is big enough and absorbent enough to dry 90% of all human hands. Contrast this with my students who are required to wash and dry their hands before and after each laboratory session. They go at the paper towel dispenser like they are raising the mainsail on the Cutty Sark until I shriek at them to stop murdering the pine forests of Sweden.

Since the turn of the year, I have been following the example of students from UC Santa Cruz and bringing a scrap of cotton hand-towel [a face flannel will do] to work. It hangs on a nail drying off in my over-heated office but comes to the bathroom with me when I go for a pee. It gets washed once a week at home, as you ask. I feel both virtuous and cleaner with that solution to drying my hands, than the one supplied by The Institute.

Two hours, a cup of industrial-grade tea and twelve pens later, I found myself talking to Patrick from Donite Plastics "the Premier vacuum forming company for heavy duty thermoplastic parts". He showed me a tray about the size of my modest laptop which was vacuum formed to hold 8 circuit boards. Our clients wanted a tray that would deliver the circuit boards to a robot for the addition of diodes and then take them to the next stage in the process. It sounded convincing; I asked him if he was in sales. That really woke him up! Not at at all he cried I am an engineer and he fetched out something from the bottom of his display shelves. It looked like it might serve as an uplift bra for a classy robot waitron in a scene from Star Wars. But in reality I was back in hand-hygiene land. It seems that Dyson Air Blades gather water when they apply their tornado to wet hands and this water is allowed to dribble onto the floor. That is unsightly as well as being a sue-that-hotel's-ass slip&fall hazard. Patrick was tasked to find a solution and his plastic twin cups were designed to clip on the wall beneath the dryer where they held the water until it could be emptied during the routine cleaning of the bathrooms. The vacuum formed plastics incorporated some silver ions in the mix as a nod to killing any bacteria than might be lurking in the cups between emptings. He was justifiably proud of his work.
Posted by BobTheScientist at 07:17