Almost the last talk at the EnvSciCnf this week came from the Geological Survey of Ireland GSI, one of Ireland's most productive government quangos. It was a report on the 400 examples of 'groundwater flooding'. This is when water comes blurfing out of the ground instead of either falling from the sky or travelling by beck rill stream and river through on its way to the sea. They only occur if the underlying rock is super soluble limestone karst: the water dissolves the calcium carbonate CaCO3 so that it becomes a complex network of sub-surface fissures. Given several thousand years, the fissures grow into interconnected tunnels and caves like Mitchelstown. Limestone cave-systems are thus always connected with and by water: as my pal Roy found in his near-death experience in Sleet's Gill. Groundwater flooding is when, hours or days after a good spill of rain, the underground network fills up and spills out of the top to flood the landscape. In Ireland these temporary lakes are called turloughs and they look like this:

Joan Campanyà <trigger Catalonia> of the GSI is The Effective in project GWFlood tasked to map the turloughs in space and time, so that all the stake-holders have a good idea about when and where and how deep water will appear. We have a pretty good idea of the location of all the [N=400] places where a turlough has ever appeared, but some of these locations are up a rough bohereen in Co. Roscommon and [so] there is no continuous record of their ups and downs and disappearance. There are two main techniques

This before and after picture-pair caused an audible WTF?gasp at the conference - to which I contributed. In a dry summer, the landscape is covered in grass and quietly chomping cattle belching us all into oblivion with their methane-laden burps. In a typical winter windsurfers can scud across the choppy waves. Rahasane turlough in Galway is 2500 ha in extent. My post-talk question was "how often must you change the batteries?" A: never nowadays because each post has a solar charger. Nevertheless setting up 400 wet-depth poles doesn't scale up from the N=20 pilot study. This is where SAR kicks in with its ability to detect back-scatter; 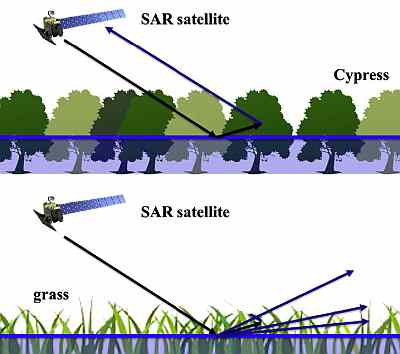 SAR-sat directs a radar beam to earth as it passes over the landscape. IF it strikes flat water THEN radar-waves bounce off and awaaaay [the angle of incidence is equal to the angle of reflection] ELSIF the beam strikes something bumpy [trees in pic above, but also rocks, hillside, undulations] THEN some of the waves are returned to be picked up by a detector on the satellite. Joan and co. have cross-referenced the terrestrial depth-post data with the satellite data and found a good enough match; so that's probably where they are going forward. For me this is a really nice mix of 19thC mapping & surveying with 21stC satellite magic. On the top of our hill in the Blackstairs is a rainfall monitor owned by Met Eireann: a copper funnel with a precise diameter over a collecting churn. One of the teenage girls in the last cottage up our bohereen was contracted by Met Eireann to yomp up the hill on a regular basis and measure the accumulated water since the last tally and throw it away so the churn was zeroed for the next slop of data. That is romantic but not efficient.

Why does it matter? Continuous data streaming of depth and area from groundwater flooding can help planners to determine where NOT to allow building to address Ireland's housing crisis. Because GW flooding involves landscape with no surface escape path for the flood-water, turloughs tend to hang around for a long time. Several families were unable to drive to-fro their homes for weeks after the "100-year floods" of Jan 2015. With climate change, you can bet your sweet bippy that 1000 year floods are now 100 year floods and 100 year floods will come more frequently. Cross-referencing the rainfall data with the flood-rise data allows a much wider demographic to plan their lives so that the car is on the right side of the turlough as if spreads across the bohereen . . . and go and buy a dinghy next time ALDI has one on Special.