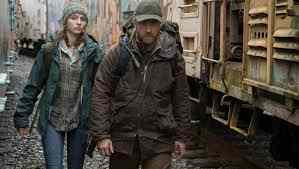 The last Saturday in March was the last film in the Blackstairs Film Society 2018 Winter Film Season. After my feeling queasy walk-out of Dogman in February, the BFS committee promised me something more fluffy this time. That transpired to be a 2018 coming of age in the woods story called Leave No Trace [scene R] directed by Debra Granik and co-starring Thomasin Harcourt McKenzie as the teen. Because we are now film-primed for violence, and because of my afore-mentioned low threshold for suspense the film was more curate's egg fluffy than full-on fluffy. Whatever, it was this much worth going to: The Beloved and I spent ten minutes over Sunday lunch reflecting on what it meant. We had skin in the game because our teenage daughters both departed from the parental home just as they became old enough to vote. Thomasin Harcourt McKenzie was 17 when she made the film and is playing a girl a few years younger but, with the help of an amazing camera crew she captures the shimmering transition from girl to young woman. Shimmering because for every three steps Onward there will be at least one step back to the comfort and security of childood where someone, in this case her single parent Dad, will look after you.

Problem here is that Dad, war-damaged with nightmares about helicopters, can barely hold it together for himself let alone his motherless daughter. At the start they are camping out in a National Park in the Pacific Northwest with aspirations to return to nature but actually skimming what they need from occasional visits to town. He can light a fire without matches, but there is a propane 2-burner stove; she can pick wild mushrooms for dinner but also eats a lot of supermarket oranges. These symbols of urban life are used to document the girl's transition into her own woman. Oh and another resonance for us is that she has perforce been educated 'at home' [in forest clearing] and is punching above her weight on the 3Rs. The twilight world of dripping tarpaulins and visits to the Veteran's Administration for pills against the nightmares is suddenly shredded by the police and social services who bundle them out of their life on the edge.

The Man's attempt at rehabilitation of a Veteran and his dependent daughter is to secure him work at a Christmas tree plantation which comes with a 'tied cottage' + bathroom, kitchen, chairs, lights, and money. Another metaphor for the absurdity of Modern Life is that the Christmas trees, the quintessence of useless but culturally embedded ephemera, are carried from the forest by . . . helicopter. The owner of the woodlot believes he's doing the Vet a favour by working his gästarbeiter until his hands bleed. There is a rather heavy-handed scene where Dad takes the TV off the dresser and lugs it into the bottom of the closet - to show how he rejects the obvious trappings of American Life. And he likewise is shown to reject the offer of a pair of cell-phones because they've managed without them all along. Evicted from a damp rainy fog-shrouded primeval landscape in the National Park, he reckons a house-with-a-bathroom and work is a poor exchange .. . . and he precipitates a dawn flit from there before the girl can get enrolled in the local school.

I hear that LnoT has been getting accolades all over, so it's not just us it spoke to. We've never owned a TV; our daughter's missed school entirely; we have phones but they're not smart and the landline is often down: so we don't buy into the whole devil's bargain of modern life. But we are a long way from living in a bender-tent in a forest, or even a hut in the woods just outside town like Henry "simplify simplify" Thoreau. As my life careers down the track to retirement, I am making conscious decisions about Stuff, as in Less Stuff because little of it will be any use when the waves lap at the front door.

After some further adventures on buses, freight-trains and trucks, he has a near-death experience in the woods and she gets him help from a local trailer park community of pensionable and personable were-hippies [no no they are none of the extras in Twilight] . . . once-hippies. They are kind; not driven by money and the material; yet even here Dad's feet are itchy; even when he's lent a dog for a bit of unconditional love therapy.  When he calls time and sets off on the road again she refuses to follow him - unlike the goddam dog, her love is conditional - she needs to make her own way in her own way.

The End
The film is nice, the ending is sort of hopeful: he is still restless and troubled and the helicopter is still going WUKKA WUKKA WUKKA in his head but he's brought her this far and he can see that she is ready for, that she needs, an independent life. They'll always have The National Park and she'll always be handy with a knife. You can't see her settling for the bland suburbia that dissolved the girl at the end of Walkabout.

Review by Mark Kermode
Posted by BobTheScientist at 07:31