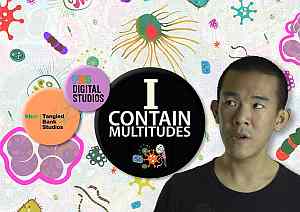 I have finished Ed Yong's I Contain Multitudes, his book about the intestinal microbial flora. It's gallop and has a number of interesting stories about how unexpectedly nifty are the interactions that have been driven into nature by evolution. For many of us in Europe, such stories negate the idea of a deity.  Darwin and many others have objected to the cruelty: I cannot persuade myself that a beneficent and omnipotent God would have designedly created parasitic wasps with the express intention of their feeding within the living bodies of Caterpillars. But for me it's the complexity: surely if Your Omnipotence wanted to creates something nifty from scratch you'd be a bit more streamlined and efficient.

Dr Yong's thesis is that "the world we see is profoundly influenced by the world we can't see". My Food & Ferm microbiologists can see microbes, because they can do a Gram stain and use a microscope. But not all microbes; because the vast majority won't grow happily, or at all, on a Petri dish in a laboratory incubator. In one of our series of experiments, I brought in a jar full of soil and they isolated different bacteria fom the jar but we had no confidence that the colonies of dividing cells observed a couple of days later were major players in the ecosystem of that spoonful of soil.

As a modern multimedia publisher, Yong wrote a book but teamed up with a film company TangleBank Studios to make a series of <wow> short films based on the book. I don't know about you but I'm spoiled for reading my the presence of youtube which is effortless in its digestibility. It took me weeks of snatched snippets and rare whole chapters to plough though the book: my brain fighting for consciousness with the requirements to process dinner. Talking of dinner, I Contain Multitudes, is pretty comprehensive in its rejection of oral probiotics as aids to a healthy gut and hence to health & happiness. It is more or less inconceivable that pot or two of Actimel containing a single [purity ensured to get licenced] strain of a single species of Lactobacillus is going to be able, on its own, to do enough. On the other hand a far more complex mix is used in FMT as effective treatment for Clostridium difficile aka Cdiff. But that is definitely not reproducible from treatment to treatment and is administered per anum. No sane person is going to try a fecal microbial transplant by mouth: leave that to dogs . . . and indeed to rabbits.

It is more elegant to eat bacteria-food than bacteria themselves. Most living bacteria get blitzed by the concentrated hydrochloric acid in the stomach but complex sugars can come through intact. This is one of the peculiarities of breast-milk. There are a bunch of indigestible sugars secreted into the milk that do no direct good to the nursing infant but seem to tilt the balance of power in the intestinal flora; giving a bit of a leg-up to some species, so that they can more effectively exclude the black hats.
https://www.metafilter.com/161203/Breast-Feeding-the-Microbiome

If we're talking about babies we're talking about birth. Yong went to NYU and innerviewed Maria Gloria Dominguez-Bello: the Go-To for thoughts about what she calls vaginal yoghurt and its importance in establishing a functional microbiome in a newborn when s/he is delivered. It is called labour for good reason because a lot of work is going on down there to extrude an enormous 'uman 'ead (and the smaller trailing tadpole of shoulders and feeble diminutive legs) through a smaller hole in the pelvic floor. All that oxytocin squeeeze forces the yoghurt . . . good bacteria . . . vaginal microbial community into every orifice, fold and crevice of the baby's body. There are definite and reproducible differences in the gut flora of kids delivered vaginally or by C-section but these diffs regress to the mean over the next sveral weeks. The jury is out on whether there are long-term effects on the health {obesity? diabetes? asthma?) of the two cohorts.
Too much in Ed Yong's book to cover here. Get it out of the library - I did.
Posted by BobTheScientist at 07:35